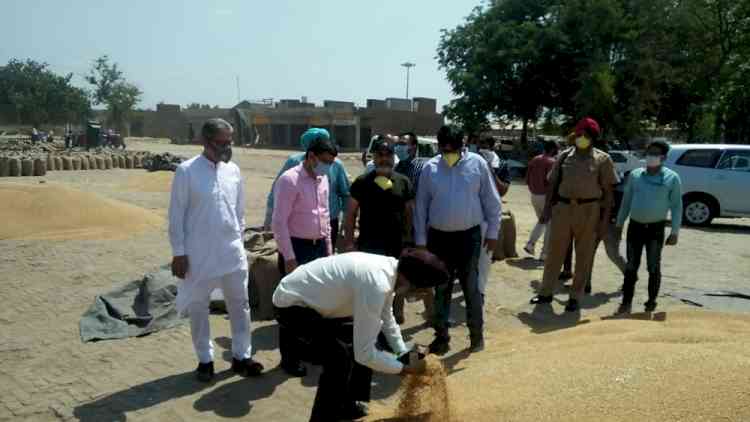 Expressing complete satisfaction over the ongoing procurement and arrangements put in place amid COVID-19, the MD PUNSUP revealed it was the result of the commitment of State Government and elaborate arrangements that 27,97,108 lakh metric tonnes of wheat had been procured across the state as compared to procurement of 12.86 lakh metric tonne till April 23, 2019. He further pointed out that the arrival of the wheat was 30,10,030 LMT since April 23, 2020, which was more than double of last year’s procurement of the corresponding period.

Accompanied by the Deputy Commissioner Kulwant Singh, the MD PUNSUP also interacted with the farmers and other stakeholders in the said Mandis and assured that every single grain of the farmers produce will be procured in a hassle-free manner across the state. The MD, who was on the visit of Ferozepur, Fazilka, and Moga districts grain markets to oversee the wheat procurement, said that due to bumper crop the Mandis have witnessed the immense arrival of the wheat crop this year, and procurement has also been up in the comparison of the previous year. While interacting with the farmers and commission agents, the MD expressed his complete satisfaction with the arrangements made by the district administration at the purchase center.

Deputy Commissioner Ferozepur Mr. Kulwant Singh said that keeping in view the current COVID-19 pandemic, special arrangements were made in the grain markets. A total of 226 purchase centers were set up in the district this year and special curfew passes were being issued to the farmers to enable them to bring their crops at the purchase centers, said the deputy commissioner. Mr. Kulwant Singh further said that every trolley was being sanitized while entering the Mandis besides other arrangements including hand washing, wearing of masks, marking for farmers, and laborers to ensure personal hygiene and social distancing.

Carelessness about covid-19 can be fatal: BJGVJ

Awareness lectures held on prevention of spread of covid-19...