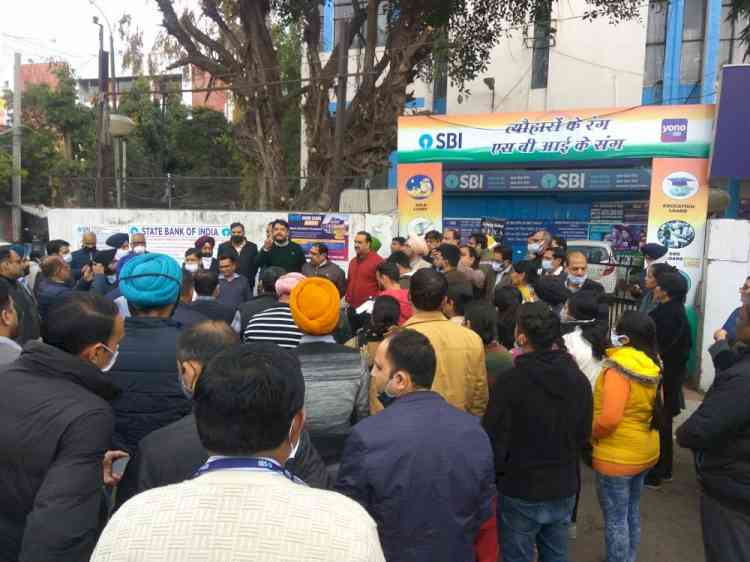 The protest was held against the announcement of privatisation of public sector banks and insurance companies by union finance minister in the recent budget session.

While addressing the rally Com. Naresh Gaur said that, the Budget presented by the Finance Minister is once again full of claims and rhetoric and far away from ground realities. It was expected that with the experience gained during the pandemic period, there would be some sensible measures to take our economic forward. But this Budget is again another exercise beating the same track.

Government’s Economic Survey talks of poverty reduction is the top priority rather than reducing disparity. But figures are coming out that while billionaires have swelled their assets, the poor people continue to grown under poverty.

Economic Survey also talks of people spending less money on hospitalization expenses. But everyone knows that this not the indication of improvement in health sector but the fact that people have no money to access the increasing privatized health care system.

Our country has the largest population of young people and hence creating jobs for them is the main issue. Already about 120 million people have lost their jobs. In this budget there is no measure to create jobs except some meagre announcements.
In this Budget also, the FM has mentioned about doubling the farmers’ income but the Budget does not spell how this is going to achieved. With Govt. insisting on their Farms Laws, the plight of farmers will further worsen.

The Economic Survey also claims that the new Labour Codes are good for the workers. FM has also spoken on the same lines in her speech. But when all trade unions are opposing the adverse changes in the labour laws, the Govt. has not tried to address any of them.

The announcement that FDI would be permitted upto 74% in insurance sector is a retrograde measure and unscrupulous foreign investors will play havoc with our people.

Similarly, FM has also announced that shares of LIC will be sold away to private hands and amendment to LIC would be done soon.

He said there is also the major announcement that 2 Public sector banks and one general insurance company would be privatized. Banks and Insurance companies deal with people’s money. Privatising them means handing over people’s money to private vested interests.

Bad Loans and NPAs in the Banks have been increasing year after year because of corporate defaulters. Instead of taking tough action on them, Government wants to white wash the Balance Sheets by shifting these bad loans from the books of the Banks to the Assets Reconstruction Company or the Bad Bank. This will only benefit the corporate defaulters and remove all the bad loans from public glare and silently write them off.

As usual this year Budget is also disappointing. There is no concrete measure  to revive and improve the economy and ensure better living conditions for the poor.

As regards the Government’s proposal to privatise the Banks along with more FDI in insurance sector, sale of shares of LIC, starting a Bad Bank/ARC, etc. UFBU will shortly decide agitational programmes including strike actions in coming days, said Naresh Gaur.