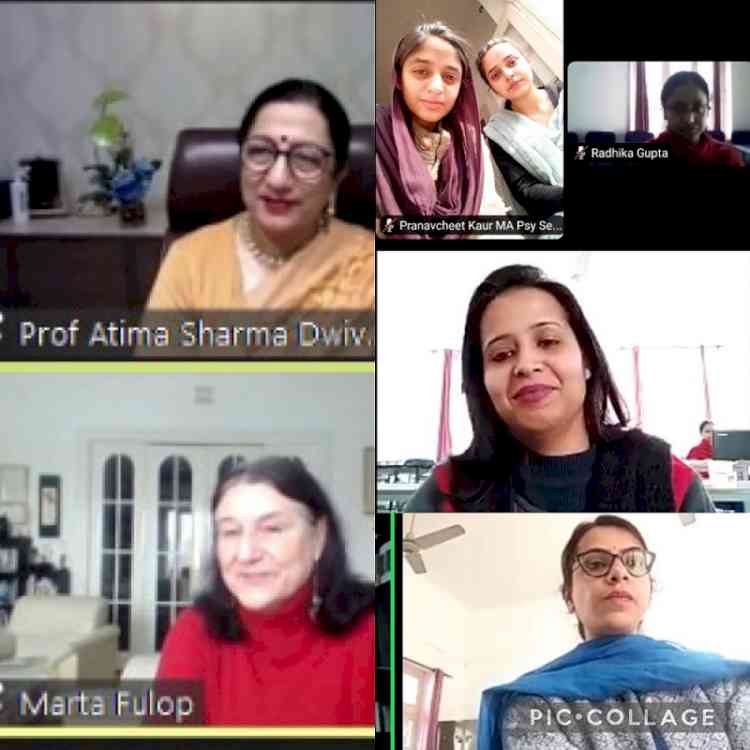 Jalandhar: Under the MOU signed with Eotvos Lorand University, Budapest (Hungary), KMV’s P.G. Department of Psychology successfully concluded a 4 Day Online International Workshop on “Psychology of Competition”. The resource person for the workshop was Prof. (Dr.) Marta Fulop, Scientific  Adviser and Head of the Social and Cultural Psychology research group in the Institute of Cognitive Neuroscience and Psychology, Eotvos Lorand Research Network, Budapest, Hungary. On the first day of the workshop, Dr. Marta explained about relevance of competition across the globe in terms of age, culture and gender. The phenomenon of competition is prevalent in all the aspects of life. On the second day of the workshop, the subjective meaning of competitiveness was wonderfully explained. It was elucidated how culture and society plays a significant role in shaping the meaning of competitiveness.  She also talked about how to conduct research in this area and various methods which can be used. On the third day of the workshop, gender differences in competitiveness were explained in detail. It was highlighted that girls are socialised to be co-operative whereas boys are socialised to be competitive. However, with changing gender role expectations, these differences are minimising. Moreover, she also highlighted that the spirit of competition surpasses the physical injuries and the person can excel in his achievements beyond his potentialities. She highlighted this point through a video of an American Gymnast named Kerri Strug. On the last day of the workshop, Dr. Marta clearly elucidated the various areas of competition in which men and women of different countries strived for. She compared gender differences in these areas of competition among people belonging to Canada, Hungary and Japan. She also highlighted that in all the countries physical looks and beauty is the major areas in which women compete for. Whereas men compete for physical strength and power. She explained that there are gender differences in competitiveness. All in all, she motivated the students to develop health attitude towards competitiveness.

Principal Prof. Dr. Atima Sharma Dwivedi averred that during the workshop Dr Maria deeply explained about the psychology of competition in terms of its physiology, gender differences, cultural influences, socialisation, impact of stress and anxiety on performance. It was indeed a very fruitful and enriching experience both for the faculty and students. She further maintained that  KMV from time to time keep on organising such international workshops in order to provide global exposure to its students. Madam Principal lauded the efforts PG Department of Psychology for successfully organising the international workshop.

Results of video competition by PUAA and ICSVS announced