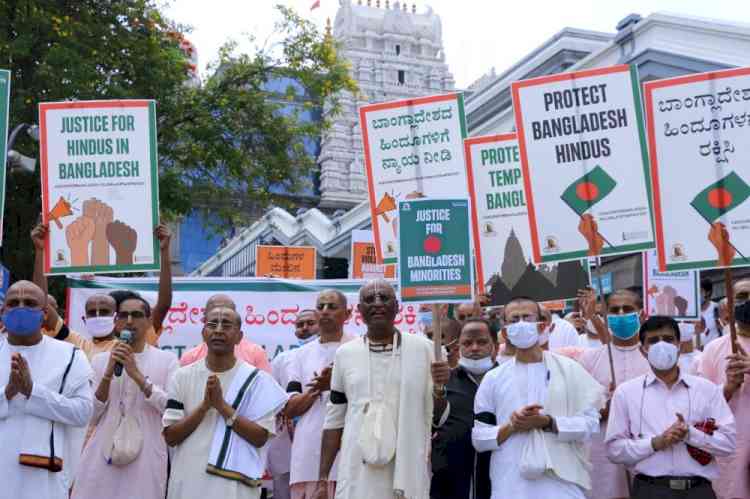 Bengaluru, Oct 23 (IANS) Condemning the attacks on the Hindu community in the past few weeks in Bangladesh, ISKCON-Bangalore held a Kirtan March in the city on Saturday.

Madhu Pandit Dasa, President, ISKCON Bangalore, said, "We express our pain and anguish on the unprovoked attacks on the ISKCON devotees, Hindus, and other minorities in Bangladesh. We unitedly stand in support and solidarity with them and pray for their safety and well-being."

"We urge the Government of Bangladesh to immediately ensure the protection of the affected minorities and take steps to prevent such incidents in the future. We also request the Indian Government to work with our neighbouring countries and protect the rights of minorities in the region," he said.

The Global Kirtan March is a worldwide peaceful demonstration of pain and grief of the global Hindu community, which stands in solidarity with the Hindus of Bangladesh. This protest is not against any religious community or the state of Bangladesh. It is for demanding the safety of all the minorities of the country, Naveena Neerada Dasa, Head, Strategic Communications and Projects, ISKCON, said.

The temples of ISKCON and other organisations were vandalised, deities were smashed, Puja pandals of Goddess Durga were burnt. The fanatic mobs also killed many people during the attacks, including Prantha Chandra Das and Jatan Chandra Saha of ISKCON in Noakhali, in Bangladesh, he added.

Many houses and business establishments of Hindus were systematically targeted and burnt down. Such attacks on the Hindus and other minority groups in Bangladesh have been going on for decades. This needs to stop, he urged.

These targeted attacks on peaceful, law-abiding communities have shaken the collective consciousness of humanity, ISKCON said. To demand protection for these vulnerable people, the ISKCON movement has organised peaceful protests across the globe, he noted.

ISKCON Bangalore had also organised a peaceful kirtan march on the Hare Krishna Hill to express solidarity with the persecuted minorities of the country. The missionaries of the temple, ISKCON congregation members and other conscientious citizens participated in the event.