The Principal of the College, Prof. Sudha Katyal, congratulated the participants 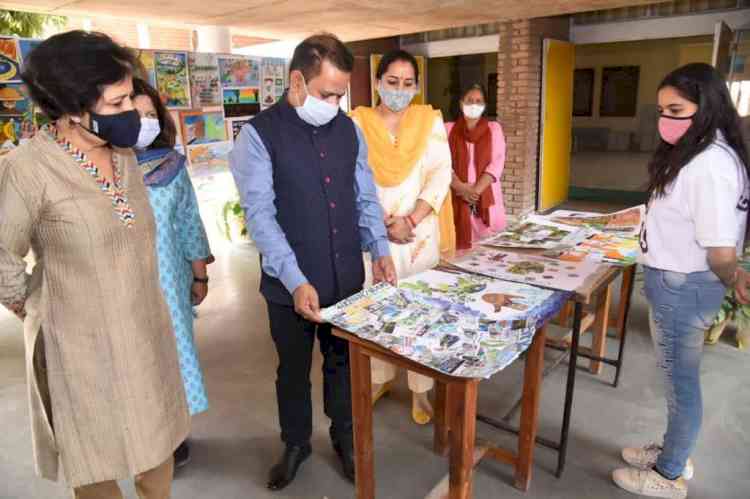 Chandigarh: The sixth day of NSS Camp started with the myriad activities related to recycling and waste management wherein NSS volunteers participated wholeheartedly. Identifying recyclable material as a resource rather than waste, the rationale was to create awareness among various stakeholders to preserve the earth’s primary resources.

Recognizing the dire need of preserving our natural resources for our future generations, the first session on “Wealth from Waste” was organized in collaboration with the Department of Environment, Chandigarh Administration and Yuvsatta (a non-government organization). Various Inter-college competitions such as Poster Making, Collage and Best out of the Waste were organized for the students to showcase their innovative and creative ideas centring around the recycling of waste materials in society. The active participation of the students from various colleges along with the creative demonstration of their ideas helped in understanding the urgent need for waste-management.

The esteemed chief guest for the event was Shri Debendra Dalai, IFS, Chief Conservator of Forests, Chandigarh  Administration. Under his guidance, the forest department maintains more than 46% green cover in Chandigarh thereby making this city Beautiful a Green City as well. Talking about MCC’s initiative of the “Wate-segregation” campaign in Chandigarh, he emphasized that cleanliness is a joint venture and the active participation of the people is a pre-requisite for the desirable outcome. The president of Yuvsatta, Mr. Pramod Sharma, who believes in the Gandhian ideals and working tirelessly for the welfare of the community, also advocated that waste management is the key to the successful implementation of “Swach Bharat Abhiyan”. Later, the chief guest along with the Principal of the college, Prof. Sudha Katyal presented mementoes to the five best students in respective competitions as a token of appreciation. At his event, Shri Debendra Dalai felicitated the principal of the college, Prof. Sudha Katyal, for achieving the “Best Herbal Garden Award” by the Medicinal Plants Board, UT Chandigarh and Yuvsatta.

Afterwards, NSS volunteers attended a session on the “Role of Sardar Vallabh Bhai Patel in India’s Freedom Struggle” by Mr. Mohit Verma, Assistant Professor, Department of Public Administration, PGGGC-42, Chandigarh and the recipient of State Award for Social Service by Chandigarh Administration on Republic Day, 26th January 2021. The session was organized to celebrate “Bharat ka Amurat Mahotsav”, an initiative by the Government of India to disseminate information regarding the rich cultural heritage of India. The resource person showcased the unparalleled contribution of Sardar Vallabh Bhai Patel in integrating almost 500 princely states within the orbit of the Indian republic. He also advocated Patel’s idea of plurality, the emancipation of backward communities and patriotism as fundamental principles for the growth of the nation at large.

The Principal of the College, Prof. Sudha Katyal, congratulated the participants and encouraged them to adopt the waste management system for the sustenance of the Green environment. While talking about the impeccable contribution of Sardar Vallabh Bhai Patel in the formation of the nation, she strongly advocated that the younger generation should learn from the life of the “Iron Man of India” and work towards the welfare of society.