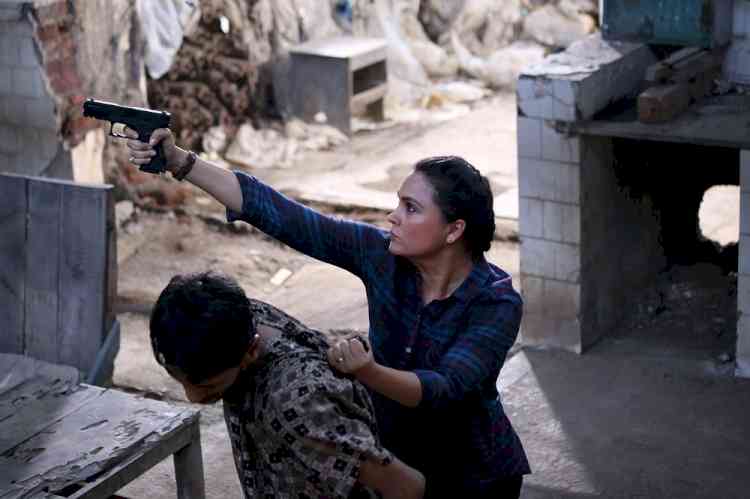 This summer Hotstar Specials has teamed up with R.A.T. Films to launch HUNDRED – a story that chronicles the many misadventures of two contrasting women, set in the backdrop of Mumbai, its chawls and crime gangs. A masala entertainer, HUNDRED marks the digital debut of Bollywood’s Lara Dutta and Marathi cinema’s Rinku Rajguru as they come together to form the most dysfunctional duo of 2020!
Lara who essays the role of ACP Saumya Shukla went through her own research and preparation for the show. To perfectly sink into the character, Lara met with some real-life on-ground female officers who've been tasked with numerous operations and have climbed the ladder of success within the police department.
Talking about her experience, Lara says, "Before we started working on HUNDRED, for the prep of my character, we went out and met with a lot of real life female police officers, who are part of the force and high ranking officers. I was really amazed to see how these function in a pretty much predominantly man's world and it was incredible to see the kind of body language that they had and the power that they exuded. I remember the female police officers that we met, they would tell us that in a lot of ways they have just become one of the guys and that the only way to really be able to function within the force. Even just the way their body language is and the way that they dress, the way that they instructed their subordinates, for me it was not just learning that but also learning and adapting to their mentality"
Hotstar Specials presents Hundred is about a terminally ill girl, Netra Patil (Rinku Rajguru) looking for thrills is hired to be an undercover agent by an ambitious female cop,  ACP Saumya Shukla (Lara Dutta) looking for a promotion. As they both unite to accomplish their own goal in 100 days, chaos ensues. Directors Ruchi Narain, Ashutosh Shah and Taher Shabbir have maintained a crisp balance between action, drama and humour that make Hundred a fun family entertainer. The cast includes power house talent in prominent roles including Karan Wahi, Sudhanshu Pandey, Parmeet Sethi, Rohini Hattangidi, Arun Nalawde and Makarand Deshpande. The 8-episode series will launch on 25th April 2020 only on Disney+ Hotstar VIP.