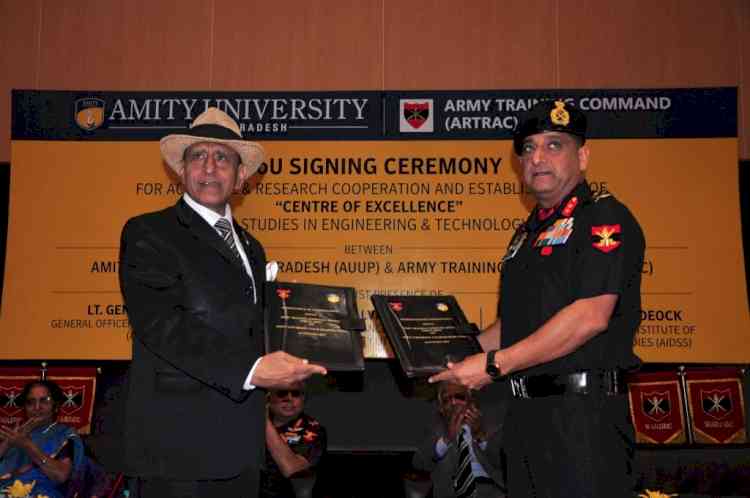 Noida, October 22, 2021:  It was a historic day for the entire Amity Education Group and particularly for the Amity University Uttar Pradesh, Noida and Army Training Command (ARTRAC) , Indian Army having established a long-term symbiotic relationship for Academic & Research Cooperation with the signing of a MoU, first of the kind with any private university,  towards starting a joint “Centre of Excellence” for Studies in Engineering, Innovation & Technology at AUUP premises under the visionary leadership and long cherished dream of Dr Ashok K. Chauhan, Founder President, Amity Education Group.
As envisaged in the MoU, the Indian Army, through ARTRAC will establish a “Centre of Excellence” for Studies in Engineering & Technology at AUUP with its enunciated objectives, viz exchange of information on educational programmes run by Amity as part of its on-campus and off-campus programmes and on ‘Research and Innovation’ currently undertaken by Amity University Uttar Pradesh.  Army would sponsor Officers to undergo on-campus and off-campus educational programmes; Collaborative Research and Innovation will be done in areas of mutual interest in Physical Sciences, Engineering, Pharmacy, Management, and Social Sciences; visits by Faculty and Students of Amity will be undertaken to Army establishments to better understand educational and technology needs of the Army and visits by Army officers to Amity University Uttar Pradesh Campuses to engage in Research and Innovation.
The “Centre of Excellence” at Amity University thus established will focus on emerging areas of Science and Technology, including Information Warfare or Security; Wireless Communication; Robotics and Automation; Tracking /Surveillance, Underwater Acoustics and Communication; Chemical storage, handling, transport, and disposal; Environment and Energy system technologies; Supply Chain Management; Communication skills, Soft Skills, and many other fields in the larger domain of Defence Technology and management.
Lt Gen Raj Shukla, PVSM, YSM, SM, ADC, GOC-in-C ARTRAC accompanied by Maj Gen Vivek Kashyap, VSM MGGS Training B, were given a tumultuous welcome by the Amity Students Jazz Band from Amity School of Engineering & Technology (ASET) playing the adorable national tune of “Sare Jahan se Achha Hindustan Hamara”. Thereafter, he was introduced to the Amity Indian Military College (AIMC) aspirants for the NDA, as also the Army officers undergoing their Study Leave Courses at Amity University and military Veterans serving in the Campus.
After the signing of the MOU, Lt Gen Raj Shukla, PVSM, YSM, SM, ADC, GOC-in-C ARTRAC delivered an exceptionally inspiring address and praised the commendable threshold of scholastic excellence, having accomplished de novo academic milestones by Amity Universities in India and overseas through qualitative research & innovation, defence strategic studies and technologies with best benchmarked world practices. He was heartened to learn of the Study Leave Courses and PhD in Defence & Strategic Studies undertaken by Army officers at the AIDSS. The Army Commander expounded his vision and was very confident that a large segment of officers would be doing research and PG studies with defined projects at Amity Universities. He made notable mention of the unprecedented progression made under the dynamic and prescient leadership of Dr Ashok K. Chauhan, Founder President Amity Education Group.
Addressing the gathering Lt Gen Raj Shukla said MoU between Amity and Army Training Command (ARTRAC), Indian Army is a step towards strengthening the institutions linkages between academia and the Indian Military. MoU are nothing unless they turn into broader alliance agreements. MoU will be successful only if interaction between Indian Army and Amity begins to deliver and delivery will only happen if this MoU turns into quality, because only quality survive in very competitive world. In his remarkable address to the faculty and students, he laid specific emphasis on ‘Civil- Military Relations’, and expounded multifaceted aspects pertaining to mutual cooperation in the domains of Academia- Industry interface, Corporate, Technology etc with explicit examples from international eminent personalities in the field of entrepreneurship. This Civil Military Fusion will begin by understanding the salience of the Indian forces and the civilians where academics will be  an accelerator and enabler.  Indian Forces need to adapt new technologies and therefore best of talent from military and civils should come together to create a robust system.
The GOC-in-C HQ ARTRAC visited the technical labs, where he was briefed by the respective Heads of Institutions, Mass Communication state of the art Studio and Central Library, a treasure house known as Integrated Knowledge Resource Centre which is stocked with over 2 lakh books.
Dr Atul Chauhan, Chancellor AUUP highlighted the character and ‘Core Values’ of Amity University and the vital significance of a sustainable long-term Defence Partnership to mutually benefit the military personnel and students manifold in compatible domains of academic research and project work in a highly motivating address to the audience.
Dr. Ashok k Chauhan Founder President, Amity Education Group said this is the historical occasion of signing the MoU between Amity and Army Training Command (ARTRAC), Indian Army. Amity always wanted to contribute in the nation building and this step is biggest towards it.  Dr. Chauhan called this MoU as an unprecedent, unimaginative and of great ingenuity in the history of Amity and said Amity will initiate a targeted plan to execute this historical MoU.
Prof Dr Balvinder Shukla Vice Chancellor AUUP elucidated the Achievements of Amity University and the exponential contribution to society and nation building, and said that Amity looks forward to qualitative contemporary training with ARTRAC and this path breaking initiatives with modern education facilities will provide great impetus to nation building.
Delivering the Welcome Address, Lt Gen (Dr) SK Gadeock, AVSM (Retd) explicated in brief the MoU being signed between the Indian Army and Amity University.Lt Gen (Dr) Anil Kapoor, AVSM, VSM (Retd) expounded on the issues related to M. Tech Defence Technology Programme, recently commenced at the University. Dr W Selvamurthy enlightened the audience on salient ‘Research & Innovation’ aspects at Amity. 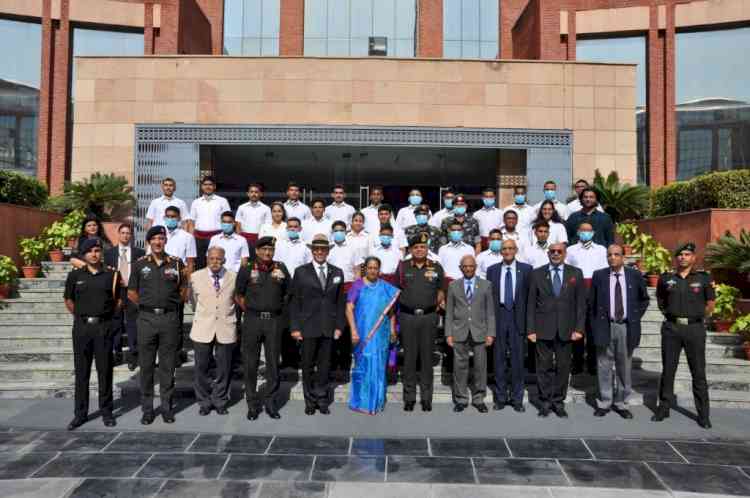 To be an innovator, sometimes it is important to forget what we have learned earlier:...

IIT-Kanpur revamps curriculum as per NEP