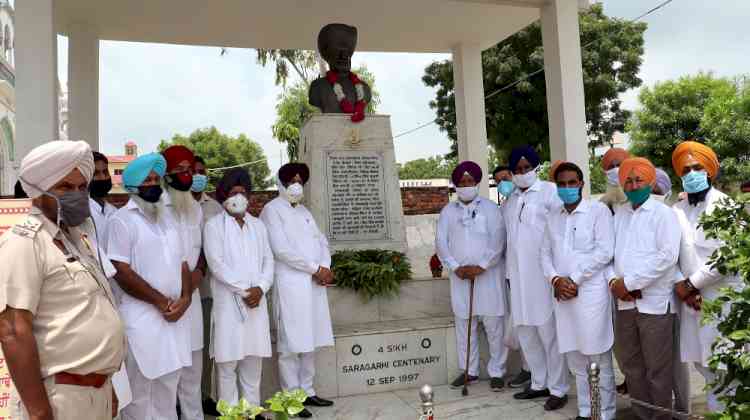 Raikot (Ludhiana): Punjab Health and Family Welfare Minister Mr Balbir Singh Sidhu today laid the foundation stone of a 10-bedded Primary Health Centre (PHC) at village Jhordan near Raikot town of district. This PHC is being constructed in memory of Shaheed Hawaldar Ishar Singh of Saragarhi War and he belonged to village Jhordan. He informed that this PHC would be constructed with a cost of around Rs 55 lakh at the site where a government dispensary existed. He informed that this hospital would be completed in next 6 months time.

While speaking to media persons after laying the foundation stone of this project, Mr Sidhu said that it would be a 10-bedded PHC, which would have facilities of cold chain room, immunisation room, ward, sterilisation room, labour room, laboratory, besides other facilities.

Mr Sidhu said that the Capt Amarinder Singh led Punjab government is committed for providing best healthcare facilities to its citizens. He said that soon, more such hospitals as well as trauma centres would be set up in different rural and urban areas of the state.

He also informed that to check the shortage of doctors in the department, the Punjab government would be recruiting a total of 4000 medical & paramedical staff in the health and family welfare department.

He said that during the COVID 19 pandemic, the health department officials worked 24X7 to ensure the safety of its residents. He said that the department officials remained on the forefront, due to which the number of COVID 19 cases in the state are much less as compared to other states of the country. He said that under the “Mission Fateh” of the Punjab government, the health staff would be making people aware about ways to keep ourselves safe from COVID 19.

Fatehgarh Sahib MP Dr Amar Singh thanked Mr Balbir Singh Sidhu for laying the foundation stone of this PHC. He said that this was a long pending demand of the area residents and it would be very useful for them. He assured the residents that many development projects are underway in Raikot constituency.

Earlier, the Health & Family Welfare Minister also paid obeisance at the memorial of Shaheed Hawaldar Ishar Singh of Saragarhi War in the village.

‘Gift a Titan Smile’ attempt to create treasured memories for life and bringing...

Placement camp by district bureau of employment and enterprises...