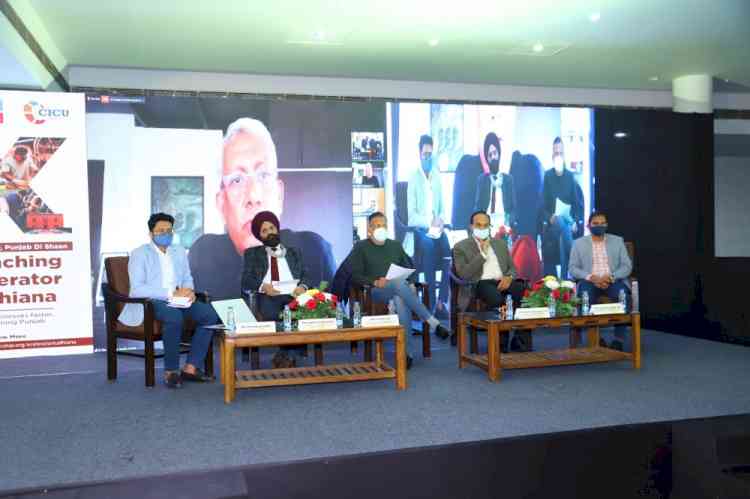 The event marked the start of the first cohort of Xcelerator Ludhiana with 27 entrepreneurs in the Rs 2 crore to Rs 50 crore annual revenue category who were selected from an application pool of over 450. The Xcelerator program has been inspired by the Scale Up Program by Daniel Isenberg, also a speaker at the event and advisor to Xcelerator, that has been implemented in other developing and developed countries such as Colombia, Brazil and USA. The program is being led by the GAME Punjab Taskforce with Mr. Sachit Jain as the chair along with Mr. Upkar Singh Ahuja, President, CICU and other key stakeholders from government, industries, banks, academic institutes and media.

“The entrepreneurial spirit of Punjab is well known and, in the last few years, we have made consistent strides towards a more business friendly environment in the state. We are committed to create more opportunities for existing and new entrepreneurs, attract more investment and amplify ease of doing business for robust industrial growth. On the same lines, I am very happy to launch the Xcelerator initiative by GAME starting with Punjab’s largest industrial hub - Ludhiana and hope that this initiative, geared towards providing the much needed handholding for mass entrepreneurs, will strengthen the entrepreneurship ecosystem in Punjab,” said Mr Manpreet Singh Badal, Finance Minister of Punjab, in his address through video conferencing.

Mrs Vini Mahajan, Chief Secretary to the Government of Punjab said, “This Xcelerator is an important step towards amplifying the entrepreneurial dynamism and enabling a conducive entrepreneurship ecosystem for the growth of Micro, Small, and Medium Enterprises (MSMEs) in Punjab. Initiatives like ‘Startup Punjab’ and ‘Invest Punjab’, which was recently recognised as the top performing investment promotion agency in the country by the Department for Promotion of Industry and Internal Trade (DPIIT), are examples of the state government’s efforts towards achieving this end. The Government of Punjab is committed to support GAME and other stakeholders in this programme.”

“We are extremely delighted to have the Government of Punjab partner with us in this effort to amplifying growth of entrepreneurship in local ecosystems. Ludhiana has been chosen as the first location for this program because of the entrepreneurial energy which exists and potential to create a model that can be replicated across Punjab and the rest of the country. The high calibre of the entrepreneurs chosen to be part of Xcelerator Ludhiana and their success we hope will inspire a thriving entrepreneurial environment,” said Mr Ravi Venkatesan, Founder, Global Alliance for Mass Entrepreneurship (GAME) and Former Chairman of Microsoft India and Bank of Baroda.

“As an important support to Punjab’s industrial transformation, Ludhiana has huge potential in some of its core-sectors like agri-tech, textiles, healthcare, light engineering, auto components, in which there is robust local expertise and a rich ecosystem of customers, suppliers etc. Hence, Xcelerator has been designed in a way that will help small businesses scale up faster in a short span of time and will also help them sustain market realities. This pilot of Xcelerator will set the base for the expansion of the program across different districts of Punjab. Building a self-sustaining pipeline of entrepreneurs, by investing in education and incubation is the need of the hour,” said Mr Sachit Jain, Vice Chairman and Managing Director, Vardhman Special Steels Ltd.

Deputy Commissioner Mr Varinder Kumar Sharma said that Xcelerator is a curated small business accelerator program to support promising growth enterprises of Ludhiana towards increased productivity, efficiency and profitability. The program has been co-designed and is led by leading industry experts, past & current bureaucrats, academic institutions, veteran entrepreneurs, trade associations, experts from banks & financial institutions, representatives from the local entrepreneurship ecosystem and the Government of Punjab.

The Xcelerator program, post completion of successful pilot, is expected to be rolled out across other districts of Punjab led by the local ecosystems and stakeholders to massively amplify business growth for mass entrepreneurs and play a critical role in reviving the business dynamism of Punjab.

About GAME:
Global Alliance for Mass Entrepreneurship (GAME) is an alliance of organisations committed to creating an entrepreneurial movement in India that results in 10 million new entrepreneurs, half of them women, who will create 50 million livelihoods by 2030. We define Mass Entrepreneurship as job seekers becoming job creators -entrepreneurs employing between 5 - 50 people. GAME is a non-profit operating as a project under Junior Achievement India Services.

Ease of Logistics portal: A win-win situation for exporters...

PHDCCI to work with AMTZ on Centre of Excellence of Digital...