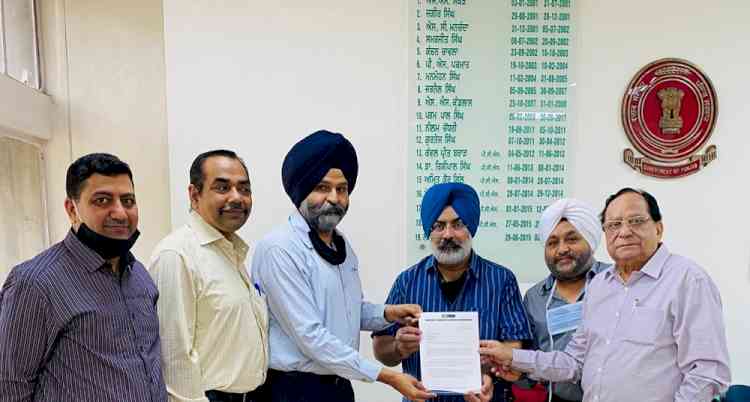 Extension in Dates for Submission of H Forms & C Forms for F.Y. 2013-14:
The department has extended the last date to submit the H Forms & C Forms by one month, but still the department is asking to submit the same by 14th November 2020; which as per the previous orders should be extended till 14th December 2020.
Mr. Tejvir Singh Sidhu PCS assured the delegation that the provisional assessment orders will be issued with a validity of 90 days, after submission of C-Form & H-Forms; and after successful submission of complete set the case will be processed.

It is also requested that to launch the special One Time Settlement Scheme @ 1%, if C forms & H forms are not available from the dealers from other states. The industry can get their cases submitted at nominal charges, this will not only be beneficial for the industry, but also will generate some extra revenue for the government. Industry is not in position to pay any interest or penalty due to the known reason.

Mr. Tejvir Singh Sidhu PCS said that the matter of OTS is concerned with the higher authorities, and his department will forward the case to concerned authorities in Punjab Government for immediate solution.

Pending Refunds of GST (State Portions):
Since February 2020, The Government of Punjab has not released any money for Refund (Offline) for the State portion of GST i.e. SGST, which is resulting in limitations in Working Capital, heavy interests are being levied by banks on excessive usage of limits, it is industry’s own money, not a grant or subsidy. You are requested to release the Tax refunds early.
Mr. Tejvir Singh Sidhu PCS said asked for the list of members whose refunds are pending and the department will process the same as early as possible.

Online Refunds:
It has been observed that the once the application for the refunds are submitted online, it takes as many as 60 days, to process the same. You are requested to process the same within 15 days of application, at least till 31.03.2020, due to COVID-19 Crisis.
Mr. Tejvir Singh Sidhu PCS assured the delegation that he will take up the matter, and will assure that the refunds will be processed within 30 days of submission.

Pending VAT Refunds before GST Period:
Due to lockdown & curfew prevailed for more than 3 months, the Industry is facing working Capital shortages. The VAT refunds which are ranging in some hundreds of Crores are still pending with the government. Even after the completion of Assessments & issuance of various Circulars in the previous times, Relief is to reach at doorsteps of the Industry. This shortfall in Working Capital funds has landed the Industry in the trap of Loans & interest thereon leading to vicious circle of Capital erosion.

Mr. Tejvir Singh Sidhu PCS said asked for the list of members whose refunds are pending and the department will process the same as early as possible.

Simple food to boost your mood

Steel price and plastic raw material hike if not controlled...