Election of 17th Tibetan Parliament-in-Exile to be held in 2021: Tibetan Election Commission

The EC also announced the launch of its new official website 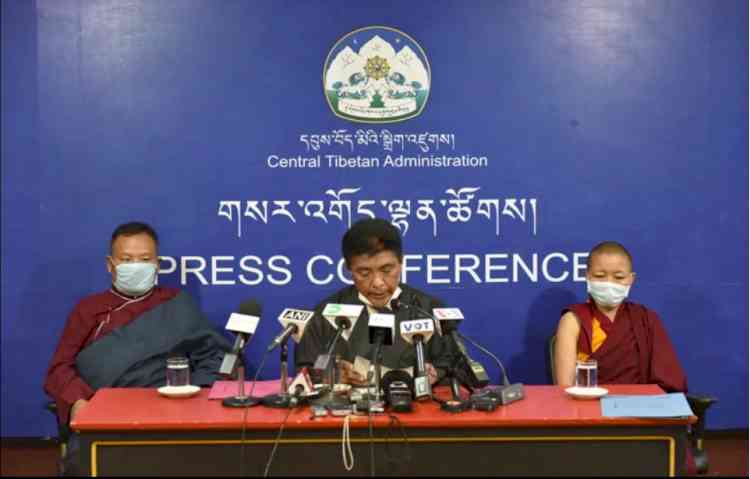 Dharamshala: The Chief Election Commission of Central Tibetan Administration, CTA on Wednesday announced in Dharamshala  the commencement of the 2021 general elections of Sikyong (President CTA) and Members of the Tibetan parliament as per the Charter of Tibetans-in-Exile and the Tibetan electoral rules and regulations

The 2021 general elections will elect the fifth directly elected Sikyong and the 17th Tibetan Parliament-in-Exile.
Addressing its first press conference in Dharamshala  on the upcoming elections, Chief Election Commissioner Wangdu Tsering, alongside two newly elected additional election commissioners, issued a set of instructions on voter registration, code of conduct, social media practices and a separate 12-point guideline for the candidates.

“Despite the current challenges precipitated by the COVID-19 crisis, the Office of the Election Commission is committed to conducting the 2021 general elections as per the stipulated time period,” the Chief Election Commissioner, Mr Wangdu Tsering announced, while directing all Regional Election Commissions and Tibetans around the world to take part in the polls in the interest of the Tibetan cause and in the spirit of unity.

The EC announced its decision to conduct new voter registration as per the provisions for voter registration enshrined in the Article 17, 18, 20 and 21 of the Tibetan Electoral Rules and Regulations, and with due consideration to the amendments made in the electoral rules, the recommendations of the amendment committee and the need of present times.

“As we approach the polls, it behoves the general Tibetan community to exercise responsible use of digital platforms and remain vigilant against the disruptive activities of elements in the society and agents from outside seeking to incite communal disharmony, “said Wangdu.

Emphasising the role of media for fair and free elections, EC Wangdu Tsering called for an unbiased and responsible reporting of the election proceedings. He said the media as the fourth pillar of democracy must remain truthful, unbiased and act with great restraint and responsibility towards society.

The EC also announced the launch of its new official website: tibetanelection.net. Central Tibetan Administration CTA in a Press Release informed that the  Guidelines have been issued by Office of Election Commission on upcoming elections of Sikyong (President CTA and Members of Tibetan Parliament),  in Dharamsala on Wednesday. Tenzin Jigme & Tenzin Paljor Press Officers, Department of Information & International Relations CTA, said that as enshrined in the Article 37 of the Charter of Tibetans in Exile, the parliament shall consists of 45 members: (1) (a) 10 members elected from each of the three traditional provinces of Tibet without discrimination of sex; there shall be at least 2 elected women members from each provinces; (b) 2 members elected from each religious denomination: Nyingma, Kagyud, Sakya, Geluk and Yungdrung Bon; (c) 2 members elected by Tibetans residing in Canada and the UnitedStates of America; (d) 2 members elected by Tibetans residing in European countries; (e) one member elected by Tibetans residing in Australia, New Zealand and Asia (excluding India, Nepal and Bhutan) to represent the Australasia constituency.

The highly religious people of Tibet, who practice a unique form of Buddhism, suffered under communist China's anti-religious legislation. After years of scattered protests, a full-scale revolt broke out in March 1959, and the Dalai Lama was forced to flee as the uprising was crushed by Chinese troops. The Charter of the Tibetans in Exile is the supreme law governing the functions of the CTA  was drafted by the Constitution Redrafting Committee and referred to the Tibetan Parliament-in-Exile for approval. The parliament, in turn, adopted the Charter on 14 June 1991.

On 14 March 2011, amendment to the Charter was made where His Holiness devolved the full political authority to the popularly elected leadership Sikyong. On 29 May 2011, the Dalai Lama retired from the Central Tibetan Administration.

Shoot of The Kanwar’s Talk Show begins with online direction

NRIs in Hongkong celebrated Bhumi Pujan of Ram Mandir as...