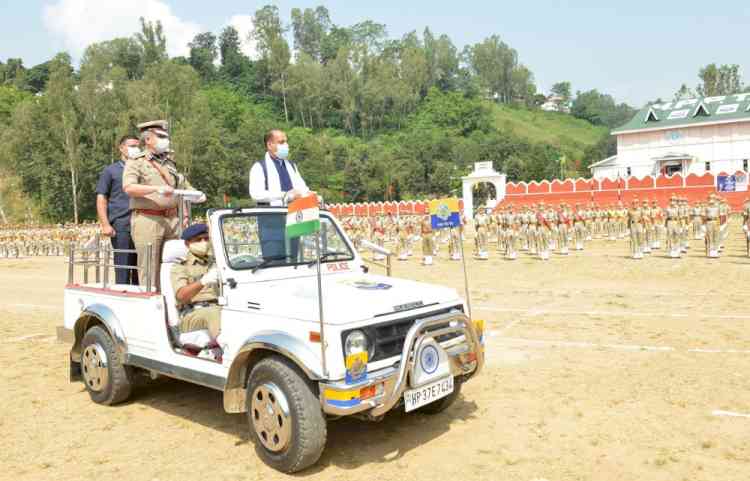 Dharamshala: Jai Ram Thakur, Chief Minister, Himachal Pradesh has announced  that due to increase in cybercrime and narcotics cases, Armed Police and Training Headquarter would be shifted from Shimla to Palampur and post of DIG Intelligence would now operate from Dharamshala for effective functioning of Police department. He also announced opening of ASP Office at Nurpur(District Kangra) adjacent to Pathankot area of Punjab. The government has taken this decision due to the increase in crime cases in areas adjacent to Punjab. Chief Minister Jai Ram Thakur while presiding over the Passing Out Parade of the Deputy Superintendent of Police probationers (12th Batch) and Sub Inspector Probationers (8th Batch) at Himachal Pradesh Police Training College Daroh in Kangra district today.

The Chief Minister said, “This is a very proud movement for the parents and family members of the probationary officers, who have passed out today. I hope that the trainees passing out today would serve the State and its people with utmost dedication and help in making it a ‘Dev Bhumi’ in real sense.”

He said that young police officers should become role models for the society and the younger generation. He said that working in the Police Force can be challenging but is also a rewarding career with a lot of chances to make a difference within the community.

Jai Ram Thakur said that the State Police has done commendable work during the Córona pandemic. He said, “As frontline warriors they have ensured proper checking of persons entering the State ensuring  that no one enter the State without proper tests and without following the guidelines set by the State Government.” He said that despite the Covid 19 pandemic the Police Training College Daroh has done a commendable service by ensuring uninterrupted training of these Young officers.

The Chief Minister   hoisted the Police Flag and took salute from the impressive march past by contingents of Police. DSP probationer Pranav Chauhan commanded the parade.

Chief Minister said that Himachal Pradesh is a tourist State where lakhs of tourists visit every year.  The police must be courteous and polished towards the tourists so that they carry good memories about the State, and police personnel  become brand ambassadors of the State.

Chief Minister said that the State Government has also accorded approval for filling up of 1000 posts of Police Constables in the State, but due to the Covid-19 pandemic the recruitment process has been delayed. He said that the process would be expedited soon.

Director General of Police Sanjay Kundu while welcoming the Chief Minister said that effective training was the very basis of any uniformed services. He said that in the covid crisis, the State Police has played a commendable role in effectively fighting this pandemic as frontline warriors. He said that the Police Training College, Daroh has completed twenty-five years of its existence and has produced some of the finest police officers in the State. He thanked the Chief Minister for providing liberal funds for strengthening infrastructure in this College.

Jai Ram Thakur also inaugurated a residential building of the trainees constructed by spending an amount of Rs 1.75 crore.
Principal Police Training College Daroh, Dr. Atul Fulzale administered oath to the Police Probationers on the occasion. While welcoming the Chief Minister and other dignitaries, he said that three DSP and 15 Probationer Sub Inspectors have passed out from this college today. He said that not only physical training, the trainees were provided training in cyber crime, criminal laws etc.