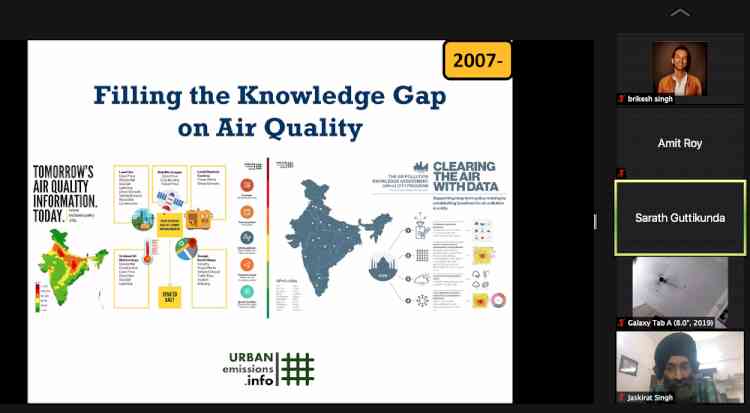 Ludhiana: Concerned citizens from across Punjab along with a panel of well-known experts came together on Wednesday for a virtual discussion- ‘Air Quality Management in Punjab’ as part of the Clean Air Punjab network in collaboration with EcoSikh. The session ensued a detailed discussion about the rising air pollution as well as the steps that need to be taken up by authorities as well as the community to manage the deteriorating air quality.

A series of campaigns have been initiated by the Clean Air Punjab, which is a citizens initiative along with EcoSikh to promote awareness among people as well as sensitization of degradation of the environment and the rising air pollution levels in Punjab.

“Data reported by these stations suggest that PM10 concentrations in all six cities were greater than the permissible limit on more than 50 per cent of days in the first half of 2021. PM10- the coarser fraction of particulate matter comes from sources like road dust, dust from construction sites, landfills, windblown dust, etc,” she explained adding that interestingly, existing source apportionment studies for cities in Punjab point to a significant contribution from sources outside city limits.

“Therefore, to address pollution in the state, it would be imperative to ramp up air quality monitoring and generate more evidence on local and regional sources of pollution impacting the state,” Ganguly informed.

Experts emphasized that it was becoming a norm for neighbouring states to simply blame Punjab during the stubble burning season, and the fact that people from Punjab are themselves a victim of air pollution is lost in the stubble burning discussion.
“Stubble burning was not the only polluting source across the Indo-Gangetic plains every winter, but it has captured the imagination and attention of popular debate as to the culprit for Delhi's grey winter skies,” shared Gunjan Jain.

Jain added that although stubble burning is an episodic source that contributes approximately 2-25% (depending on the year, season and meteorology) to Delhi’s pollution share, media debate and political blame game fail to give similar attention to the year-long polluting sources like industry, vehicles, power plants, cooking fuels, diesel generators, waste burning, dust etc which are leading to high pollution levels even in the summer months.

Meanwhile demanding action against polluters, K.S. Pannu said, “Action needs to be taken against the owners of smoke-spewing factories, especially thermal, paper, cement and chemical plants, besides brick-kilns who often deliberately turn off the pollution control devices to save cost, even though effectively installed.”

Dr Prabhjyot Kaur Sidhu stated that Punjab with nearly 83 per cent area under crops is predominantly a green state. “Despite this fact, the AQI of Punjab in May 2021, ranged from 68-220, which indicates that the air quality ranged in the Poor to Very Poor category. This continued even during the lockdown period despite reduced vehicular and industrial pollution, which highlights that we need to explore the possible reasons for the poor AQI in Punjab,” she said.

Highlighting the fact that the fight for breathing clean and healthy air in Punjab will have to be led by the citizens, Jaskirat Singh said that there was an urgent need for people across the cities of Punjab to organize themselves better and be aware of the health impacts of breathing toxic air.

“Poor policies and delayed implementation of clean air action plans, which directly or indirectly lead to deteriorating air quality needs to be challenged by well-informed and organized teams of citizens who can knock on the doors of the judiciary and approach the National Green Tribunal (NGT) to get environmental laws implemented effectively on the ground,”

Information given to students about jobs in various sectors

Responsibility of legal community has increased in current...

Ex-commandant donates Rs 5 lakh out of his pension account...