No immediate threat but vigilance needed 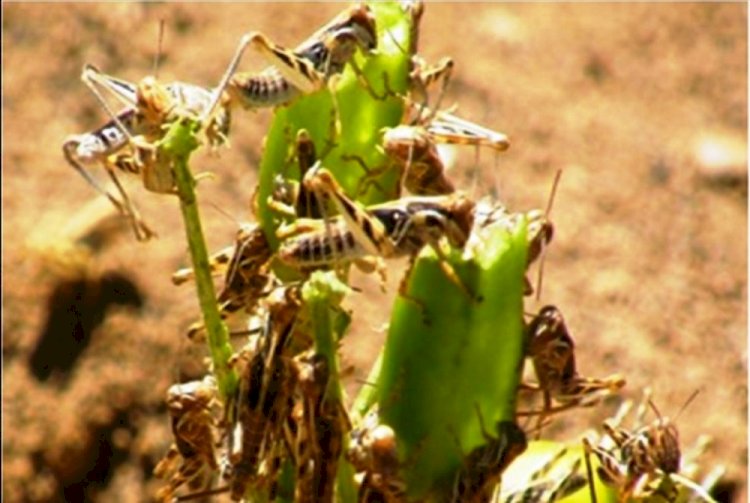 Ludhiana: Locusts are the short-horned grasshoppers with highly migratory habit, marked polymorphism and voracious feeding behavior. India has not witnessed any full blown locust cycles after 1962, however, during 1978 and 1993, large scale upsurges were observed. Localized locust breeding has also been reported and controlled during the period 1998, 2002, 2005, 2007 and 2010. Since 2010, situation remained calm and no major breeding and swarm formation have been reported.

However, solitary phase of desert locust has been reported from time to time at some locations in the State of Rajasthan and Gujarat. The Locust Warning Organization (LWO) undertakes regular surveys in the scheduled desert area of Rajasthan and Gujarat to monitor the presence of desert locust and ecological conditions. During the survey, an assessment is made to determine, if the locust numbers have crossed the economic threshold level (ETL) which is 10,000 adults/ha and 5-6 hoppers/bush that may require control.

Immature/maturing adults/swarms of desert locust have been observed in some districts of Rajasthan and Gujarat since last month. Appearance of locust in winter months is a new phenomenon and may be linked to climate change events. The surveillance by the scientists of Punjab Agricultural University at PAU Regional Research Station at Abohar and officials of the State department of Agriculture has revealed the presence of locust hoppers in small numbers or groups (of 5 to 20 hoppers) in districts of Fazilka, Sri Muktsar Sahib and Bathinda in Punjab. These hoppers in small number or groups do not cause any economic damage to agricultural and horticultural crops unless they appear in swarms that comprise of hundreds of thousands of these hoppers. Recent surveys have confirmed the presence of locust hoppers in small numbers in Villages of Gumjal, Dangarkhera, Punjava, Panniwala Mahala, Arachiki, Bhangarkhera, Roopnagar, Bareka, Bakainwala, Haripura, Khuian Sarvar of district Fazilka and in Raniwala, Midda, Aspal, Virk Khera, Bhagsar and some other villages of Sri Muktsar Sahib. The current excursions of desert locust hoppers are well monitored and suitable control measures are in place. These small non-breeding adult hopper groups do not carry serious threat and are not expected to cause economic damage to crops. The farmers are advised to be vigilant for the desert locust in their areas and need not to panic or opt for spraying of pesticides. Whenever and wherever the population of desert locust is found exceeding the economical threshold level (10,000 adults/ha and 5-6 hoppers/bush), immediate control measures are pressed into operation by the LWO and State department officials. Locust hoppers are easily identifiable; the young immature adults being pink in color while the old ones become dark grey or yellow with dark purple to black mandibles.

According to Dr P.K. Chhuneja, Head Department of Entomology at PAU Ludhiana, the current spotting/detection of locust hoppers in small numbers/groups in Punjab do not carry serious threat but we need to guard against fresh incursions from across the border, in view of expected post-winter temperature rise and availability of crop vegetation over large contiguous area. The farmers of border districts of Punjab need to be more vigilant and inform the PAU or State department of Agriculture officials or the nearest Locust Circle office for any new incursions of desert locust, so that control measures, if required can be taken up to control the menace.