Mahurkar is a senior journalist, author and interpreter of history 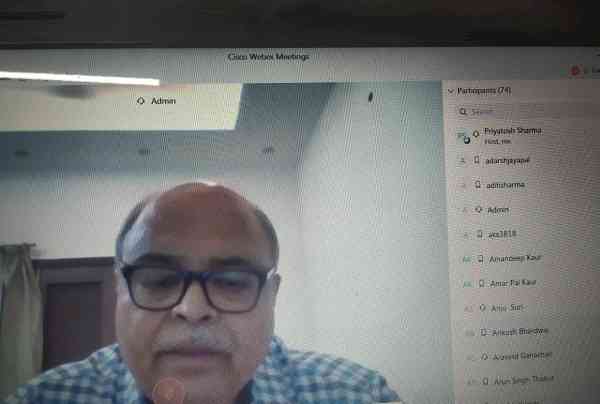 Chandigarh: The Department of History, Panjab University, Chandigarh organized a Web Lecture of Shri Uday Mahurkar on 02 June, 2020 at 6:00 PM (IST). About 80 participants participated in the Web Lecture which continued for more than 02 hours.

Shri Mahurkar, the distinguished speaker delivered his lecture on, “Revisiting Veer Savarkar in 21st Century” in a comprehensive, candid and concise manner. His intellectual abilities, oratory skills and analytical presentation captured the mind and soul of the enthusiastic participants.

Honourable Vice-Chancellor, Professor Raj Kumar applauded the effort of the Department for organizing the Web Lecture on Veer Savarkar. To him, Veer Savarkar was a diehard nationalist who played a seminal role as a freedom fighter of India. The present generation must be apprised of the struggle waged and great sacrifices made by our nationalist leaders such as Veer Savarkar to imbibe the sacrificial spirit. All Indians must keep the memory of Veer Savarkar alive within themselves to face challenges of life by comprehending them well. Professor Raj Kumar regretted that Veer Savarkar has not been given due space in the scholarly works which he deserves. There is a need therefore to write in detail about the life and role of this great freedom fighter.

Honourable Vice-Chancellor, Professor Sikander Kumar, who could not join sent his best wishes to the Department of History, PU as well as the speaker for delving on the personality of a freedom fighter in Veer Savarkar.

Dean University Instructions, Professor R. K. Singla, in his kind remarks addressed Veer Savarkar as the ‘unsung hero’ who deserves all glory. The life and works of the freedom fighters like Veer Savarkar fills the hearts of the people of our country with pride and drives them to move ahead surpassing all ordeals and difficulties.

Dean International Students, Professor Nandita Singh remarked that the organization of the lecture on Veer Savarkar was a welcome step for knowing different aspects of his personality and making a fair estimate of the part played by him in the freedom struggle of India.

Dr. Anju Suri, Professor and Chairperson of the Department in her remarks addressed Veer Savarkar as a visionary of India’s security who predicted most of national security problems being faced in contemporary times.

The distinguished speaker, Shri Uday Mahurkar in his lucid lecture appreciated Veer Savarkar for his “unalloyed nationalism”. In his ideology of Hindutva, all religions were accommodated but there was certainly no place for religious appeasement in the name of equality. Savarkar’s Hindutva was a Hindu protective view to guard Hindu religion and community from the radical elements of proselytizing religions. Savarkar’s Hidutva could never allow creation of a nation within nation. The author highly appreciated Veer Savarkar for his sense of predicting the national security issues. The concern of Hindu-Muslim unity was exploited fully by Muslims to ask for special rights for their community. Veer Savarkar in 21st century comes before us as an iconic personality which encourages us to boldly face the challenges of life and be fearless and vocal for taking the position which is morally right and the one which remains unchallenged. Veer Savarkar, for whom the nation had always been the top most priority, is reviled by a few on account of his role as a revolutionary though actually, he should be judged through the prism of his ideology and beliefs. The pan-Islamists, the pan-Christians and the Communists attack Savarkar for their own interest to pursue their religious and ideological goals. Savarkar’s unalloyed patriotism, however, sought to unite the entire nation by giving equal treatment and rights to all and appeasement of none.

The highly informative and incisive lecture was followed by Question-Answer Session conducted by Dr. Priyatosh Sharma, the Associate Professor of the Department of History who partnered Professor Anju Suri, in the team of organisers of the lecture. The lecture was joined by experts from academic, scientists, researchers, students and faculty members from various diverse Departments and Universities across India. The lecture ended with the formal vote of thanks to the participants by the organizers.

Data and analytics focused upon at webinars in Amity University