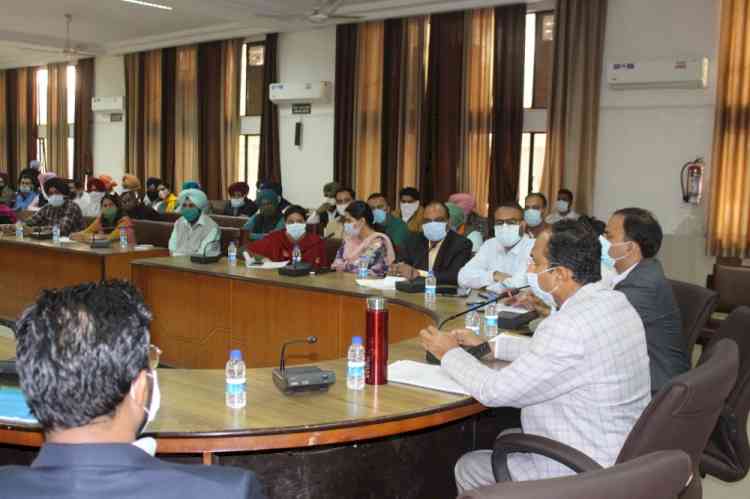 Ludhiana: Aiming to provide the benefits of the Ayushman Bharat- Sarbat Sehat Bima Yojna (AB-SSBY) scheme initiated by the state government for ensuring cashless health insurance to the targeted beneficiaries, Deputy Commissioner Varinder Kumar Sharma on Friday held a meeting with the Guardians of Governance (GoGs) and solicited their support for making the scheme more successful.

Presiding over a meeting held in Bachat Bhawan, Deputy Commissioner asked them to sensitize the people holding smart ration cards, construction workers, SECC beneficiaries, small traders, yellow/accredited journalists, and J-farm holder farmers are eligible under the scheme and they must enrol themselves.

He said that they can take details of the camps, Common Service Centres (CSCs), Sewa Kendra and inform the people in their localities so that they can visit the camps or other places for getting enrollment.

He said that the valuable feedback received from the GoGs was very helpful for the administration to remove shortcomings if any.

Sharma said that by acting as ‘Eyes and Ears’ of the state government and the district administration, the GoGs were doing marvellous service for the society.

Meanwhile, in the meeting, GOGs gave their recommendations for various programs and the GoGs sought the personal intervention of the Deputy Commissioner for further streamlining them.

GOGs sought details about funds received from the government by the Panchayat department following which DC asked officials to give entire data of funds according to village wise in the district. They also raised the issue of potholes on Jagraon road and later on, the Deputy Commissioner asked the officials to write a letter to NHAI for immediate repair of the stretch.

DC also said that the construction of Khanna-Samrala-Machhiwara road would start soon and a grant of Rs 7 crore has also been received after GOGs complained about the bad shape of the stretch.

Welcoming the suggestions of the GoGs, the Deputy Commissioner said that the administration would take appropriate steps to ensure that feedbacks given by the GoGs were resolved at the earliest.

He also asked SDMs to hold a meeting with Tehsil level GOGs regularly every month and take action on their feedback at the earliest.

On the occasion Additional Deputy Commissioner Amarjit Bains, SDM Dr Baljinder Dhillon and others were present.

Poultry, goat rearing and piggery to be promoted for increasing...

Four prisoners manage to escape from Central Jail in Ludhiana