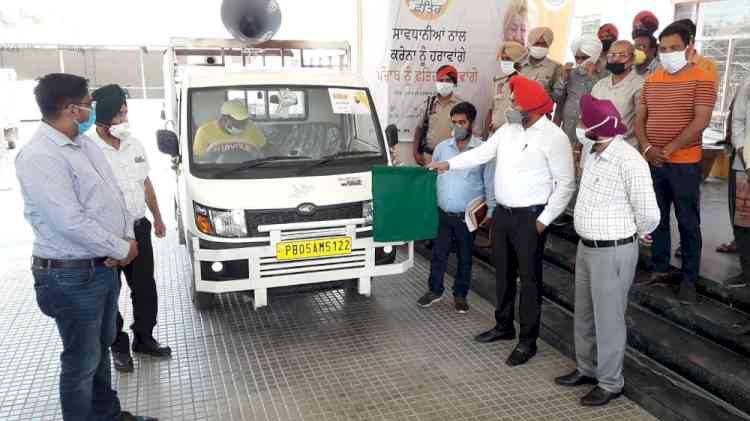 The Deputy Commissioner, accompanied by SDM Amit Gupta,  Assistant Commissioner Ravinder Arora, Civil Surgeon Dr. Navdeep Singh, Secretary Red Cross Society Ashoke Bahal flagged off the vehicles from the District Administrative complex as a part of this campaign, which was launched by the Punjab Chief Minister Captain Amarinder Singh a few days back. He said that during these week long campaign around 28 vehicles would disseminate information to people by moving in villages and cities across the district. Mr. Singh said that during this campaign major thrust would be on generating maximum information regarding the threat and precautions from Corona Virus as it was the only way to keep this pandemic at bay.

Divulging more details about the weeklong activities to be carried out during the drive, the Deputy Commissioner said that on June 15th felicitation of Corona Warriors would be organized by the district administration and on June 16th door to door sensitization by Anganwari workers would take place.

The Deputy Commissioner also said that on June 21st sensitization drive would be started by the Resident Welfare committees and other citizens. Soliciting fulsome support and cooperation from the people for this noble cause, he said that the war against Corona could be won by making the norm of social distancing an integral part of their lives. Mr. Singh asked the people to stay at their homes, wear masks while moving in public, wash their hands with soaps/ use sanitizer and others.

Sarpanches in Ludhiana district to issue passes for medical...

Awareness lectures held on prevention of spread of covid-19...