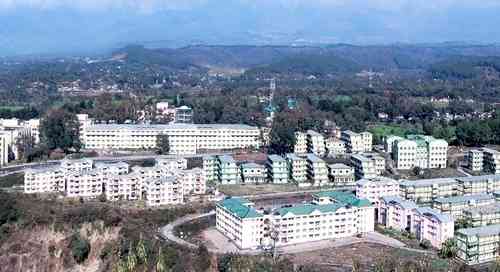 Dharamshala: Amid deep tensions the District Administration and people of Kangra have come forward by setting an example and have taken many a step to help not only the local people and outsiders but also levelling their best to feed the animals kept in the gaushalas as well as stray animals.
The administration is issuing online passes to the needy to take their medicines and essential items during curfew. Home delivery of essential items is also being ensured and also medical help on call.  Effective steps taken by the District Administration under the leadership of Deputy Commissioner Rakesh Prajapati has made this crisis looking so relaxed now. Everything is running smoothly now, though it is the biggest district of Himachal Pradesh. It is noteworthy that not only the first coronavirus death occurred in this district in the state but it also witnessed two other positive cases.
Today, the District Red Cross Society distributed six quintals of ration to people living in slums at Chetru near Dharamshala. Passes are also being issued to the people are arranging for fodder to their animals and the animals kept in the gaushalas.
The WhatsApp Group, Kangra-Against Covid19 is also doing a wonderful job by approaching to the people in need directly and by coordinating between the administration and the public. An isolation centre has been created at Government Senior Secondary School, Kandwal in Nurpur sub-division by the local SDM. The Principal and students of GSSS (Boys), Nagrota Bagwan also started cooking community meal to the needy people today after taking permission from the local SDM after sensitizing the campus.
The Khalsa Saviours Gurudwara Singh Sabha, Dharamshala provided rations to 300 families and packed rations for others during the curfew relaxation. Residents of Kotwali Bazaar played as angels to the families of some labour stuck in McLeodganj by arranging food for them.
Meanwhile, it is time to relax though for a while only that all the 16 samples taken were found negative. This includes the number of 13 persons of close contacts of positive patients.
Though the District Administration and a good number of people are acting proactively but the goal of coming over COVID19 can’t be realized until the public in general not practice the formula of Social Distancing.
DC has urged the people to play safe as it is estimated that around 10,000 people have entered the district after March 10.