Avers experts at a panel discussion organized at Amity University 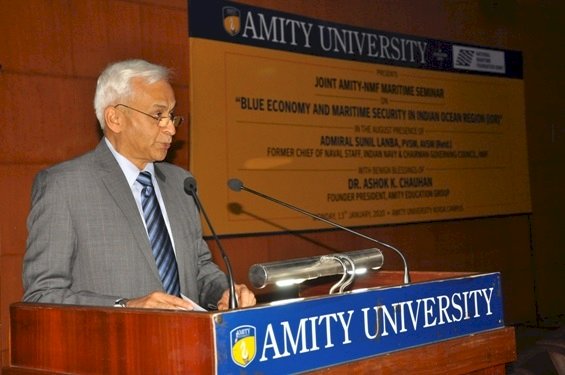 Noida: Oceans are increasingly gaining importance by enabling international trade via linking sellers and buyers and will be the key enabler towards the creation of the 5 trillion dollar Indian economy by 2024. With Prime Minister Narendra Modi also stating that oceans will play a significant role in achieving this target, the growth of the “Blue Economy” gains noteworthy importance.

Enhancing more than 80 percent of global trade, marine and coastal environments constitute a key resource for economic development. Thus, a great amount of emphasis needs to be laid on growing the Blue Economy in a sustainable, inclusive and people centric manner, particularly in the Indian Ocean Region (IOR) keeping its strategic location and importance in view. In this context, Maritime security assumes an important role to provide the required safety and protection to ensure further growth of the Blue Economy.

This was the central focus of the student-centric panel discussion as part of Maritime Seminar-2020 organized by Amity University, Noida jointly with National Maritime Foundation (NMF) on Blue Economy & Maritime Security in the Indian Ocean Region. Students were asked to express their views on the six priority pillars in the blue economy including Fisheries and Aquaculture, Renewable Ocean Energy, Seaports and Shipping, Offshore Hydrocarbons and Seabed Minerals, Marine Biotechnology Research and Development & Tourism.

Admiral Sunil Lanba, PVSM, AVSM (Retd), Former Chief of Naval Staff of Indian Navy and Chairman Governing Council, National Maritime Foundation (NMF) in his keynote address shared the significance of the topic, with far reaching implications, for India and the world at large. “For a maritime nation like India, the whole economy is Blue Economy and a scientific based approach is essential for its development.” He also called for a need for sustainable policy and legal framework at national and international level to address the different aspects of the Blue Economy. He further stressed upon the need to modify or amend the existing national and international laws and policies to include the tenets of the Blue Economy.

Views were shared on how an expanded Blue Economy will create greater demand for maritime security capabilities, and this, in turn, will trigger increased investment and growth in these capabilities. The enhanced and increasingly diverse role that maritime security will continue to play in the Blue Economy can be seen across all sectors in the IOR.

Congratulating students who spoke on the different verticals of the Blue Economy, Admiral Lanba also said, “India’s destiny is fundamentally linked to the oceans. If you want the economy to grow at a particular pace you need to look at the Blue Economy. You need an efficient system of ports and infrastructure to deal with that. For the economic well-being of the country it is vital that we concentrate on all aspects of the blue economy.”

Deepti Jangpani, second year student of Amity Institute of Marine Science and Technology while talking about “Blue Economy Involving Fisheries and Aquaculture” shared how fishery and aqua culture is very important economic activity and a flourishing sector in the country with various resources and potential of engaging over 14.50 million people at the primary level.

Congratulating students on their clear and well-researched vision while sharing their views, Capt Sarabjeet S Parmar, Executive Director, NMF said, “there is a need to step up on technology or we will miss the bus altogether. And if we cannot do it ourselves then we should take the help of nations who have all the wherewithal to help attain our targets”.

Dr W Selvamurthy, DG, ADSI & President, ASTIF asked students to make concrete recommendations and go beyond the regular deliberations on the subject. “Indian Ocean has achieved great significance not only for strategic but also for economic reasons. And this blue economy will contribute to nation building, economic growth and national security,” added Dr Selvamurthy.