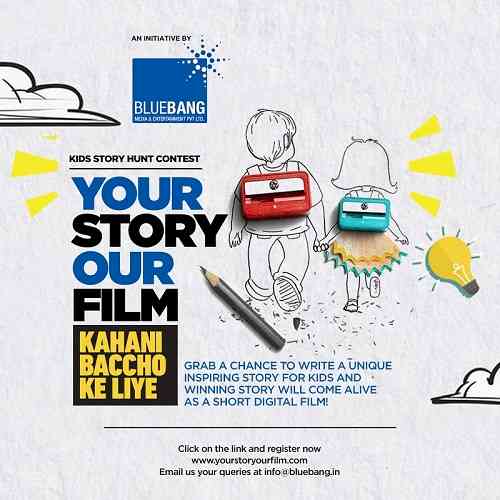 Mumbai: Blue Bang Media & Entertainment has been in the space of  Media and Movie marketing for more than 10 years , they have been associated with clients like Yash Raj Films, Sony Pictures , Fox studio , Disney , Viacom studio , Reliance Entertainment, Zee studio , Red chillies studio, Pen Studio and Many more independent studios on many landmark movies .
Blue Bang has taken this initiative of launching this story Hunt contest know as – Your Story Our Film – Kahani Baccho Ke Liye.
It’s a great opportunity created for talented people where they can participate and send in their unique and inspiring stories which are targeted to entertaining kids.
Best selected story would be converted into a digital short film and would solely produce by Blue bang media and Entertainment and backed by well know Director, cast and crew.
People of all age groups across India and globally can participate in this Kids story hunt contest and get a chance to see winning story getting converted into digital short film.
Easy way to participate in the contest is to register yourself on the given link www.yourstoryourfilm.com and upload your stories in maximum 1500 words.
MD and CEO Mr. Vinay Punjabi of Blue Bang Media & Entertainment says “India is a great country with people having great creative minds. This is a best time to build and create some landmark short kid’s oriented film which will inspire and entertain kids for generation to come. Your story our film is a simple initiative to bridge the gap of great story idea to an actual short film.”

Searching My Land- A Novel By Parul Sharma