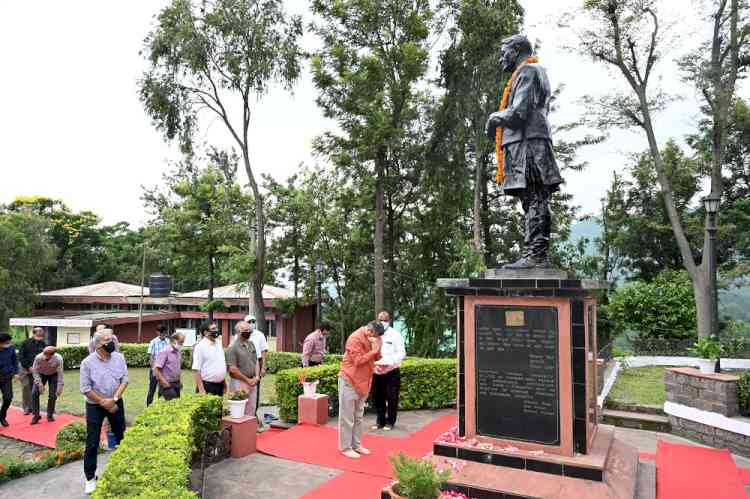 Nauni (Himachal Pradesh): Floral tributes were paid today to the architect of modern Himachal Pradesh and the first Chief Minister Dr YS Parmar on his birth anniversary at the Dr YS Parmar University of Horticulture and Forestry (UHF), Nauni. In a tribute to the leader, Van Mahotsav being celebrated at the University for the past over two weeks came to an end today with senior officers planting wild pomegranate plants at the University campus.


The event began with Dr Parvinder Kaushal, UHF Vice-Chancellor and senior officers paying floral tributes to the visionary leader whose strenuous efforts led to full statehood of Himachal Pradesh. Speaking on the occasion, Dr Parvinder Kaushal, UHF Vice-Chancellor said it was a matter of great pride and honour that the university was named after the great leader who advocated the development of horticulture and forestry in the state. He said it was his vision that has led to the development of the state. Dr Kaushal urged  everyone to follow in the footsteps of Dr Parmar who dedicated his life for the development of the state and betterment of the poor and farmers. He added that Van Mahotsav is an event, which not only connects everyone with nature but is also an important activity to maintain a balance with nature.