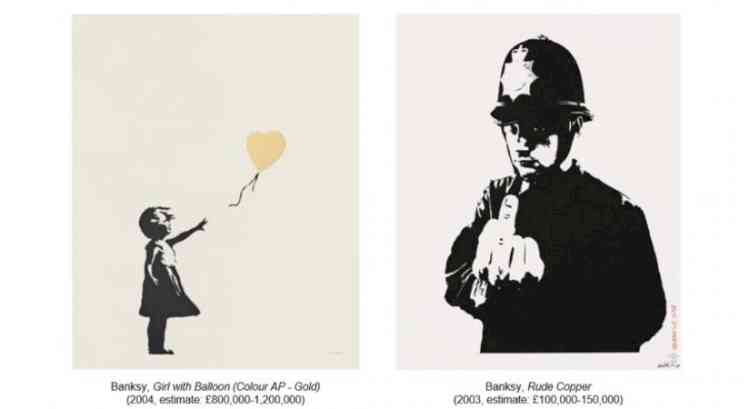 By IANSlife Features
New Delhi, Sep 13 (IANSlife) Prints and editions by Banksy, an anonymous British street artist, will be up on sale in an online-only auction by Christie's, which is open for bidding from September 9-23. It is cheekily titled 'Banksy: I can't believe you morons actually buy this sh*t', in homage to the artist's Morons screenprint.

The source image of this work is a photograph of the record-breaking sale of Vincent van Gogh's Sunflowers at Christie's in 1987, with van Gogh's canvas replaced by Banksy's text.

The auction will be led by the rare 'Girl with Balloon' (Colour AP -- Gold) (2004, estimate: 800,000-1,200,000 pound). It first appeared as a series of stencil murals sprayed in various locations across London in 2002, and the subsequent screenprint of this iconic artwork is perhaps the most desirable Banksy edition. The image of the girl with the red balloon is synonymous with Banksy, but there were a limited number of signed artist's proofs made in other colour variations and these are extremely sought after, said Christie's.

It adds: The sale also features some of the artist's best-known and coveted screenprints, including a signed impression of Rude Copper (2003, estimate: 100,000-150,000 pound illustrated right) and two colour variations of his iconic Kate Moss -- Red, Lime Green Colourway and Green, Turquoise Blue Colourway (2004, estimate: 150,000-250,000 pound each).

Highlights from the sale will be on view at Christie's headquarters in London as part of the pre-sale exhibition from September 17-22.

(IANSlife Features can be contacted at [email protected])

How Indian festivals are creating job opportunities for SMEs?

Juxtaposing the resilience of Jews in India with artwork of Siona Benjamin (IANS...