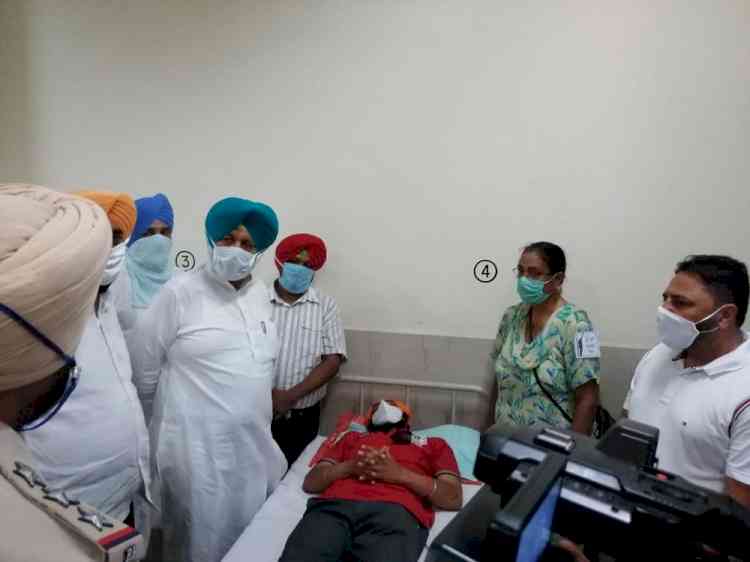 Ludhiana: Punjab Health & Family Welfare Minister Mr. Balbir Singh Sidhu assured Health Worker Mr Mastan Singh that strict action would be taken against all culprits who manhandled him while he was on duty for COVID-19. The Minister visited Mr Mastan Singh at Community Health Centre, Dehlon (Ludhiana) today and interacted with him. He was also accompanied by Gill MLA Mr Kuldeep Singh Vaid, Civil Surgeon Dr Rajesh Kumar Bagga, besides several others.

While speaking to media persons on the occasion, Mr Balbir Singh Sidhu said that that one of the main reasons for the spread of disease and mortality is that people having symptoms report to health facilities very late and delay their testing for COVID-19 so that special campaign was being conducted to trace every suspected symptomatic person. On the order of higher authorities, Mr. Mastan Singh, posted under Community Health Centre Malaud, visited a place called Prabhu Ka Dera in village Khanpur for screening. When he reached to get the information about the suspected symptomatic patients, Mr Mastan Singh was brutally manhandled by the Sadhus and some of his associates where a video of the whole incident was made on a mobile phone.

Mr. Sidhu said that SMO Dr. Gobind Ram Maloud and SMO Dr. Santosh Kaur, Dehlon immediately informed Civil Surgeon Dr. Rajesh Kumar Bagga about the whole incident.  Acting on the information, Dr. Bagga had brought the matter to the notice of Deputy Commissioner Mr Varinder Kumar Sharma and Commissioner of Police Ludhiana Mr Rakesh Agrawal. He said that Dr. Bagga visited the worker who is admitted in a hospital and he also talked to Mastan Singh over phone and enquired about his health.

Condemning this incident, Mr. Sidhu said that the health workers of Punjab were working day and night to keep the people safe from this deadly disease. Any attack on any health worker will not be tolerated at all. He directed the Commissioner of Police, Ludhiana to ensure the security of health workers as Ludhiana recorded the higher number of COVID-19 cases. He also instructed that arrest all the accused persons as soon as possible and punish the culprits so that no such incident happens in the future.

Mr. Sidhu said that he stands for his employees at all times and would not let their morale fall under any circumstances and I appeal to the general public that they should respect the efforts being made by the health department's employees to tide over this crisis situation.

Mr Kuldeep Singh Vaid said that the police officials have been conducting raids to arrest the accused persons and assured that all the culprits would be behind bars in next couple of days.

Punjab imposes restrictions in all cities during unlock-3

Community Health Center to come up at Doraha in name of...