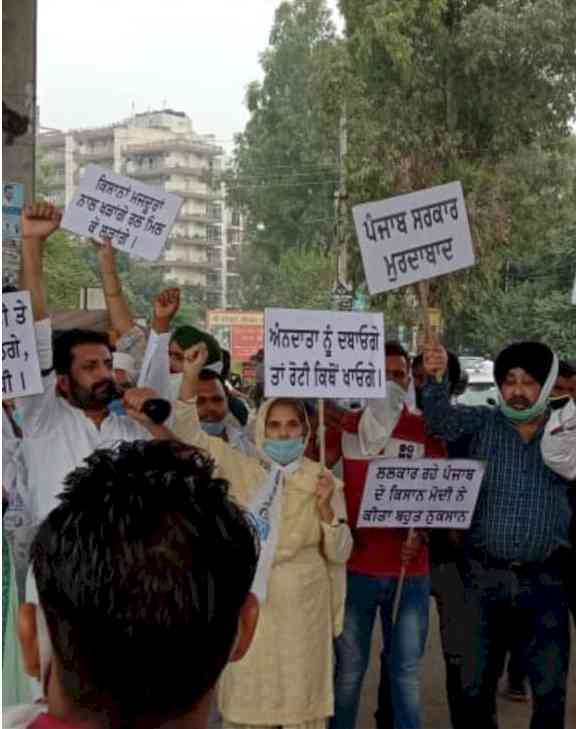 Zirakpur: Political parties have also started getting support from farmers on the three agricultural bills brought by the central government. In this series, a fury rally was organized in Zirakpur in support of the farmers from the Aam Aadmi Party.  Senior leaders of AAP Navjot Singh Saini, Kuljit Singh Randhawa, Sweety Sharma, Karamjit Singh Chauhan, Babbal Preet, Savita Puri, and Marfi Bhatia were present on this occasion.

During this, AAP leader Swarnajit Kaur said that today BJP is engaged in ruining the farmers. With the new agricultural bills, the provider of the country will be stuck in the clutches of big traders. These bills will gradually bring the grain markets to the brink of closure. Not only this, any trader will buy and stock his crop from the farmer and when the demand of that crop in the market will be made, he will earn a hefty profit by selling it at an expensive price.

He said that after this law the farmer will remain as a labourer in his own farm. Demonstrating in favour of the farmers, the AAP leader said that he and his party will not allow these laws to be implemented in the country under any circumstances. They will agitate against farmers by mixing shoulder after shoulder with them, no matter what is sacrificed for it.

AAP leader Swarnjit Kaur said that the way the BJP passed these bills in a hurried manner by ignoring the entire opposition in the Rajya Sabha, the BJP's intention has been clear, but the Aam Aadmi Party can only do so by returning these laws. Will take. He said that today the government is saying that every grain of farmers' crop will be purchased on MSP, but when the crop of the farmer is sold outside the market then who will come to pay tax in the market.

The AAP leader said that this scheme is applicable in Bihar since 2006. If the farmer was happy with this scheme, then why would a 6-acre landlord of Bihar come to Punjab to work on a 2-acre landlord's farm. He described the day passed by the new agricultural bills as a black day for the country.