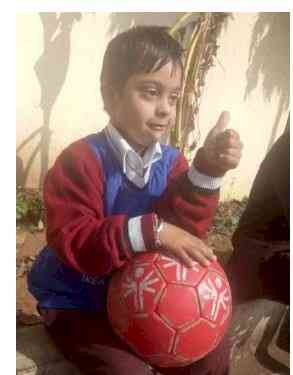 New Delhi: The Special Olympics' Young Athletes introduces the power of Special Olympics into the single most influential period –early childhood development – and brings with it the potential to make a long term, meaningful impact on the social, cognitive, psychological and physical development of young children with intellectual disabilities. This impact benefits not only the children, but families, caregivers, teachers, coaches, volunteers and communities as we create a more accepting and inclusive world for children with intellectual disabilities. .  Mukta Thind is the lead of this initiative in India.

The Special Olympics' Young Athlete- Pranavheer’s mother had no idea how to look after a child with Downs Syndrome. She was speechless and anguished when the diagnosis of her son’s condition was revealed to her. When Pranavheer was 6-7 months old his milestones were not up to the mark. The doctor counselled his mother to motivate and strongly support her son and only that would impart him the best quality of life. He belongs to a sound family background cocooned in the love of his over protective sister and his parents, both of whom are working. However, his aggressive behaviour was becoming a concern for his mother. In the year 2016-17, Pranavheer joined St Joseph’s Convent, Jalandhar, Punjab.

St Joseph’s Convent is an integrated School having 85 students in its Special wing, being the first Convent to have a special wing in Northern India. 23 out of these are enrolled in the Young Athletes Program. The YA drills are conducted every day Monday through Friday for 30 minutes. This schedule has been followed since the past three months. The School would be officially incorporating the Young Athletes program in its curriculum from the new academic session.

Rekha, Pranavheer’s mentor recalls how he had been so difficult to control in his first session. He had to be checked for flinging the equipment across and for misusing it. His restive behaviour often called for individual attention of the supervisors. 3 Months on Rekha says, “The changes in his behaviour are tremendous. He is not only compliant but also tries to help his co-athletes. Holding the ball, throwing, walking , jumping- all this and listening to instructions is a great achievement. Group sessions have improved his behaviour”

Pranavheer looks forward to these sessions as they make him very happy and has brought him closer to his Mentor- Rekha Kashyap and her team which includes Sr. Rosi, Navjot Sarup and Mamta Sharma. Every morning his mother only has to take any one of theirs’ name and that’s enough to see him dress on time!

Tanshu- rolling over the odds