A virtual event on reframing gender in Indian cinema and media 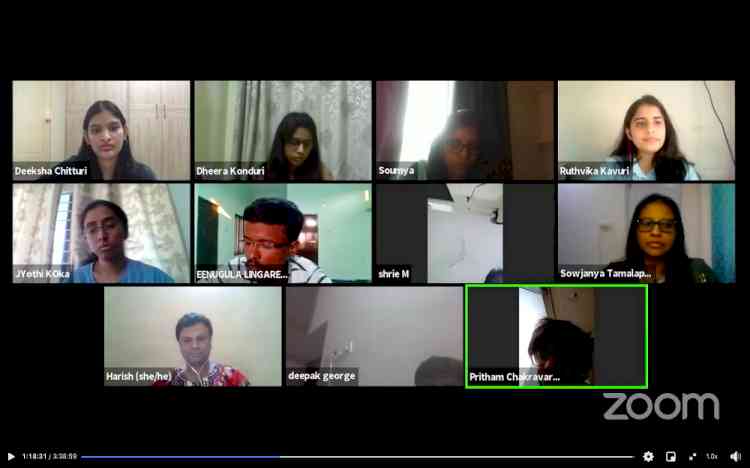 Hyderabad: Observing the UN Women InternationalDay of Elimination of Violence against women, Youngistaan Foundation’s Genderprogram organised a virtual event - 'Generation Equality 2020' on Saturday to tackle the misrepresentations of gender in media and cinema on Zoom, live-streamed on Facebook, Twitter and Youtube.

The event started with soothing music to set the tone for the evening. Followed by which, Satchit Puranik briefly explained the terms 'Gender, Art, Activism' and highlighted that In 107 years of Indian Cinema, one has seen multiple shades and glimpses of masculinity which probably did not get the kind of attention it deserved. Maybe because the toxic ones made more business sense. He added, "The future of a community is the future of expression and responding to the times we are living in. So as youngsters, you are going to form a society."

In continuation to the topic of Representation of Gender in cinema, Pritham Chakravarthy emphasised "We need to change the mode of storytelling where we are so hero-bummed. We should start referring to the characters as Protagonist and not a Hero / a Heroine then the society will automatically take the Gender out of it". She also said that now is the time we actually learn to boycott watching such movies because ultimately the button is in your hand and you don’t have to go to a theatre.

Apart from Women, we have also witnessed the misrepresentation of the LGBTQI+ community in the Films. Harish Iyer shed light on how incredibly it is important to see Representation of all kinds of Gender in Indian Cinema. He further quoted "I believe that Cinema can inspire, influence, and it is a very powerful medium. That’s why it shocks and upsets me to see such a beautiful tool being misused. I am not saying makeQueer character as saviours / kind-hearted souls all the time but show queer people in all shades of queerness."

In continuation with the talk on Gender and Sexuality in Cinema, Sowjanya Tamalapakulu underlined the importance of observing it through the lens of Caste. She questioned  "Why cannot we discuss lesbian sexuality by using the characters from a lower-caste community? Why does theRepresentation of Sexuality always exclude the caste? Does that mean that certain caste people do not have sexuality? She concluded her speech by addressing her questions and on how violence against women and caste go hand in hand.

Besides Cinema, Mainstream and Digital Media also plays a huge role in representing women's issues. Responding to the same topic, Dhanya Rajendran added "For many years, media has covered women’s issues in a completely patriarchal way. Nobody questioned the kind of language that was used to represent a woman. But at the same time, we don’t write about all kinds of women. If we are writing about women's issues, we need to write about women from different caste and class." She added, "We have to constantly learn, unlearn and keep telling ourselves to not be biased and be more inclusive of women's representation in the news coverage".

The session completed with a panel discussion and a set of questions posed by the audience. They thoroughly enjoyed the panellists discussing such vital topics.

Sharing about what they've learnt from the event, Dheera a student pursuing her Bachelor's said " I liked this week's webinar as it opened up topics which were rarely heard of or even spoken about. The chronology of films and its representation given by Harish Iyer was very intriguing as it also showed the work and representation that needs to be done in the upcoming years of the film industry".  Jyothi, an active participant and a software employee said "This session was power-packed by eminent speakers on the panel. It was very delightful to listen to them. Personally, Pritham's word on the limitation of roles for women was an eye-opener for me. All the panellists were wonderful and huge learning to takeback home".

Concluding the session and the 16days of activism period, Arun Daniel Yellamaty, Founder of Youngistaan Foundation said, "You as an audience play a bigger role. So kindly be a responsible reader, and viewer. Let's be vigilant and watchful of news that we consume, and let's stand up for things that are vital". He later thanked each and every volunteer for making this campaign a success.

Over 80+ participants attended the virtual event while more than 3,000 people watched it on social media platforms. This event was hosted in partnership with Lamakaan, BreakthroughIndia, and The Jimme Foundation.

40 experts attend seminar on corrosion impact on infrastructure in city