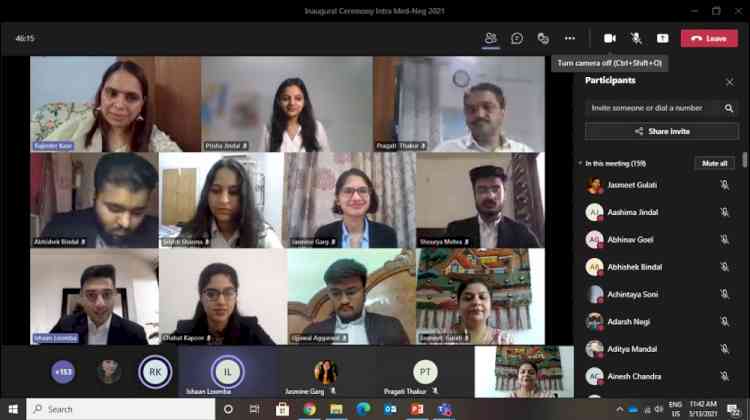 Chandigarh: The University Institute of Legal Studies, Panjab University is organising the 4th Intra Institute Mediation and Negotiation Competition from 13th - 16th May 2021 through virtual mode on the MS Teams platform.

Prof. Dr. Devinder Singh, Professor at Department of laws, Coordinator of Dr. B.R. Ambedkar Centre and Secretary to Vice Chancellor, Panjab University in his inaugural address congratulated the participants and re-emphasised that mediation and conciliation has been a traditional practice in India. He reminded the gathering that the roots of the Alternative Dispute Resolution lies in the Indian culture. He spoke at length about ADR being a Gandhian Principle and that Mahatma Gandhi was an advocate of the alternative dispute resolution in India. He said that Indians traditionally use “samvaad” as a means to resolve any “vivaad” and in the light of the same encouraged the students to safeguard the rule of law and preserve the individual dignity and freedom. He urged the students to always practise pristine standards of personal and professional conduct so as to uphold the unimpeachable freedom, relevance and prestige of the dispute resolution mechanism. He concluded by wishing the participants and the organising committee good luck.

Prof. Rajinder Kaur, Director, UILS apprised the audience of the plethora of achievements, events and activities of Alternative Dispute Resolution (ADR) Client Counselling(CCL) BOARD, UILS in brief. Prof Rajinder credited the faculty and students for their unremitting hard work and commitment which has made the event a successful one despite it being virtual.

The ADR CCL Board  headed by Dr. Jasmeet Gulati as the coordinator introduced the members of the Board and stated that the event had 300 students as participants and 80 volunteers. She remarked that the vision of the Board is to apprise students of the career opportunities in the field of alternative dispute resolution and the event seeks to hone the practical skills required in the streams of mediation and negotiation.

The event was concluded by the vote of thanks of the President of the ADR CCL BOARD, Mr. Ishaan Loomba. The wide smiles, jubilant mood and upbeat atmosphere attested to the joy and sense of achievement which was being felt by all the students.

Workshop on “Brush Strokes” at UIFT and VD, PU

Class VI student Nishta Sharma did creative work at her...