New policy of discharging suspected patients from hospital being prepared 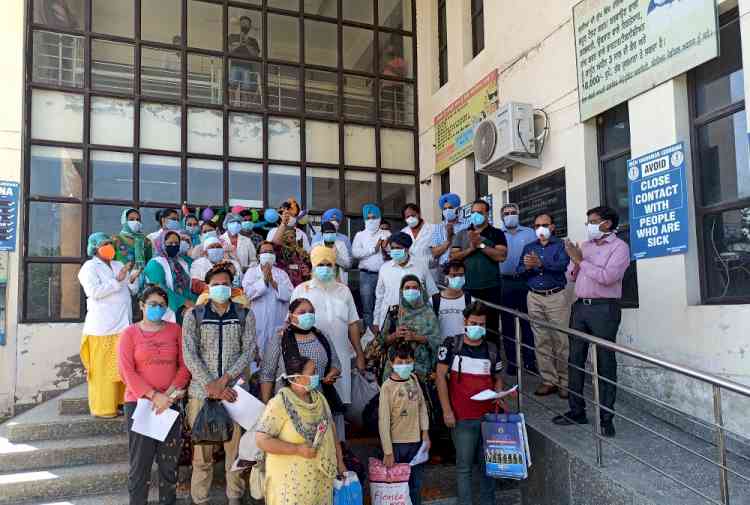 Ludhiana: Deputy Commissioner Mr Pradeep Kumar Agrawal today informed that in a good news, till date, a total of 46 patients have been declared cured in district Ludhiana. He informed that the patients declared cured today included 4 Kota (Rajasthan) returned students and 25 Nanded (Maharashtra) returned pilgrims, whereas four more are from other parts of the district.
He informed that two new positive cases have been reported in the district in last 24 hours time. He said that till date, 4718 samples have been taken, out of which report of 4328 has been received. He informed that till date 148 patients related to Ludhiana have tested positive, while 59 patients are from other districts/states. He said that 46 patients have been declared cured, and unfortunately six deaths have been reported. He said that at present the total number of active patients in Ludhiana is 96, who are undergoing treatment at Civil Hospital Ludhiana and Mother Child Hospital near Vardhman Mill, here.
Mr Agrawal informed that the Punjab government has formulated a new policy for discharging suspected patients from hospitals, in which, if the suspected patient is asymptomatic and does not show any symptom in 72 hours, and is healthy, then they can be discharged from the hospital. This new policy has been received and would be implemented as per the directions of the Punjab government.
He further informed that the Uttar Pradesh government has given green signal for allowing migrants to travel to their state by buses in 10 districts namely Mathura, Saharanpur, Merrut, Gautam Buddha Nagar, Ghaziabad, Aligarh, Buland Shehr, Muzzafarnagar, Baghpat and Hapur. The District Administration has started preparations in this regard. He informed that the persons whose names have been cleared by the UP government would be intimated through SMS. He said that even the Bihar government has also allowed travel of their residents through buses.
He stated that the number of trains leaving from Ludhiana to other states would increase in coming days. He informed that 10 trains would depart tomorrow, while 11 on May 18, 2020. He informed that 8 trains departed to different states today. He said that till date, more than 69,000 migrants have travelled to their home states from Ludhiana.
He further informed that the Punjab government is paying for travel, food, water and pickup service from designated points. He informed that the medical screening of all passengers is being done after which, they are issued medical certificates by the District Administration. He further said that till date, around 7.30 lakh migrants have applied to go to their home states from Ludhiana and the Punjab government is in constant touch with the other states and more trains would be started in coming days so that maximum number of people can be sent to their home states.
The Deputy Commissioner stated that the Punjab government would soon receive new directions related to lockdown from the Union government, that would be implemented from May 18, 2020 onwards.
The Deputy Commissioner appealed to the residents to not fall prey to misleading rumours on social media. He said that some unscrupulous elements share orders of other districts on social media and claim them to be the orders of District Administration Ludhiana, that causes confusion in the minds of people. He urged them to get connected with the social media handles of the District Administration, such as official website, ludhiana.nic.in or the twitter handle of District Public Relations Officer Ludhiana, @LudhianaDpro or Facebook page, facebook.com/dproludhianapage/ for authentic and timely information.
Earlier, the patients were discharged from the Mother Child Hospital near Vardhman Mill, here today. Such persons were welcomed out of the hospital by MLA Mr Sanjay Talwar and Deputy Commissioner by offering them flowers. MC joint commissioner Mr Navraj Singh Brar and Civil Surgeon Dr Rajesh Kumar Bagga were also present on the occasion./( May 16)

5-day webinar series dealing with the impact of covid-19 on Indian society, citizenry,...

Large number of daily wage earners without any ration:...