Social issues highlighted by youth through various forms of arts 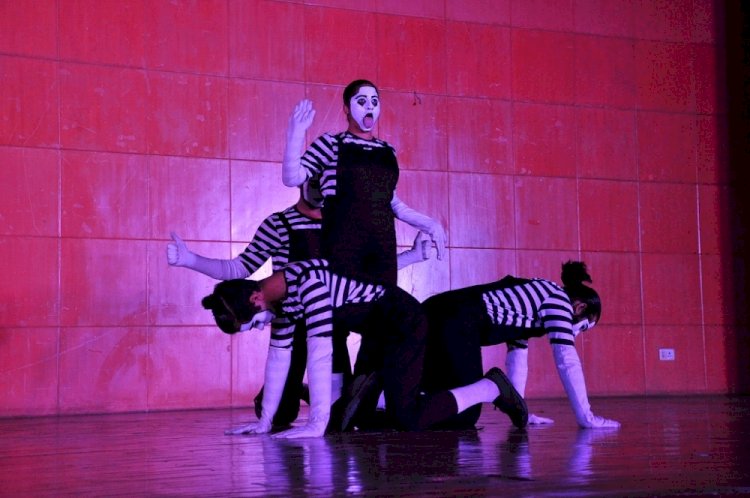 Participants of Mime Competition making an impact through power of silent acting.

Noida: The colorful cultural festivities continued on the fourth day of 35th AIU National Festival- ‘Amity UTSAV’, during which numerous cultural activities such as Skits, Mime, Mimicry, On the Spot Painting, Spot Photography, Cartooning, Western Vocal (Solo), Classical Vocal (Solo) and many others were held today.

Amit Ahirwal, participant and student of Barkatulla University, Bhopal apprised that his team’s skit emphasizes with several problems within the society which are now being ignored or taken as part of life, which is wrong. He said that with this act, they want to spread the message of equality, importance of education for all and the thought with which our constitution was written, i.e secularism and equal right for all.

Team of Gauhati University took the message of Gender Equality and showcased the agony of women by putting the other gender into the situations women face such as eve-teasing, dowry demand, domestic violence etc. The team raised the message of “Equal Empowerment and Respect.”

Making an impact through the power of acting, participants of ‘Mime’ competition showcased power packed performances and made the audience feel the emptions of their stories without words.

Shivshakti Parmar, student from Maharaja Krishnakumarsinhji Bhavnagar University said, “The art of mime encompasses all the feelings of the soul and is one of the finest forms of acting which shows that silence is powerful than words.” He added that mime is the dying art of India and is still lookup for acceptance in the society.

The team from Rani Durgavati Vishwavidyalaya Jabalpur performed on the theme ‘Incredible India’ which focused on the factors that make our Country great. A message of ‘don’t drink and drive’ was represented by the team from Central University of Jharkand, who beautifully showed the imaginary consequences a family faces after a member of their family dies due to a drunk driving accident.

Around 15 students of various universities participated in the ‘On the Spot Painting’ competition, on the topic Nature Study. The participants had to complete the artwork within the allotted time frame of 2.5 hrs.

The musical extravaganza was yet again witnessed today with melodious performances by participants who enthralled the audience with their musical prowess during ‘Classical Vocal Solo’ and ‘Western Vocal Solo’ competitions.

Highlighting the political and social scenario of India, a ‘Cartooning’ competition was also organized with 15 participants from universities and institutions including University Of Mysore, Swami Vivekanand University, Bundelkhand University, Jhansi and others who displayed their artistic best through political satire artwork.

The National Winners of the competitions held during AIU National Festival will be declared tomorrow, i.e February 6, 2020 during the valedictory ceremony from 10.30am onwards.

Webinar on “Building Brands in the Automobile Segment”...

Web lecture on “The Rigours and Chills of a Journey in...