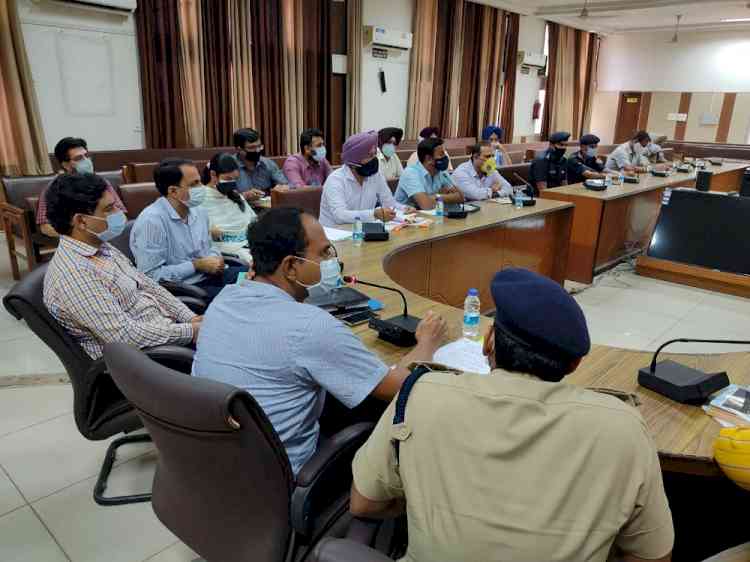 Chairing a high level meeting of all the departments to review arrangements for flood control here today at Bachat Bhawan, the Deputy Commissioner said that the duty roster of staff has also been prepared in the control room to ensure it operates round the clock.

He said that in order to effectively monitor the staff, the senior officers of the administration have also been appointed to check this control room on rotation basis.

The Deputy Commissioner also under scored the need to put in place a viable mechanism for completing all the flood control arrangements. He said that the officials must remain vigil so as to avoid any sort of untoward incident due to rain.

Sharma also directed the officials to strengthen flood prone sensitive places to minimize damage in the possibility of excess water being released from the water reservoir.

He also asked the Sub-Divisional Magistrates (SDMs) to establish local level Flood Control Rooms in their division for constant monitoring of the situation. The DC instructed officials to constantly coordinate with each other via WhatsApp groups to closely monitor the situation during monsoons. He directed them to keep their mobile phones switched on round-the-clock.

Sharma said that evacuation plan, in case of flood, has already been finalized and the sensitive places have been identified along with the safe places where the residents of flood prone areas would be shifted, if required.

He also reviewed the arrangements made by Food & Supply, Irrigation, Power, Drainage, Municipal Corporation and Police department for tackling the situation, in case of floods.
Sharma asked the Drainage department to immediately start the work of cleaning of all the drains in the district. He also told the officials to install wireless public address system in vehicle to alert people of floods.

Ghumar Mandi Market Road and National Road to be developed...