100th train departs from Ludhiana, till date, more than 1.20 lakh migrants left for their home states

Efforts for safe return of migrants to their home states to continue: DC 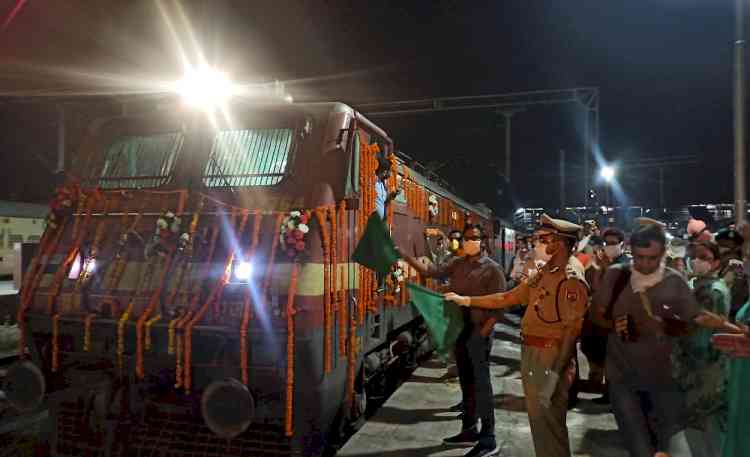 Ludhiana: The 100th train carrying migrants to their home states departed from Railway Station Ludhiana today. The train service had started on May 5, 2020, and till date, more than 1.20 lakh migrants have left for their home states. The 100th train was flagged off by Deputy Commissioner Ludhiana Mr Pradeep Kumar Agrawal from Railway Station late evening today. He was also accompanied by Commissioner of Police Mr Rakesh Kumar Agrawal, Commissioner, Municipal Corporation Ludhiana Mrs Kanwal Preet Kaur Brar, besides other officials.
It is pertinent to mention that besides Ludhiana, trains are also departing from Jalandhar, Patiala, Ajitgarh (Mohali), Amritsar, Ferozepur, Sirhand and Bathinda on daily basis and each train carries around 1200 migrants. Till date, the Punjab government has sent trains to states such as Uttar Pradesh, Bihar, Madhya Pradesh, Manipur, Andhra Pradesh, Jharkhand, Chhattisgarh and other states.
Mr Pradeep Kumar Agrawal stated that more than 7.5 lakh people from other states have applied to go to their home states from Ludhiana. In a good news, now many of them do not want to leave for their home states because they have returned back to their jobs since the day industry started its operations in Ludhiana. He said that in the coming days, District Administration would be increasing the frequency of trains. He said that the Punjab government is also sending migrants to nearby states by buses now.
He further informed that the Punjab government is paying for travel, food, water and pickup service from designated points. He informed that the medical screening of all passengers is being done after which, they are issued medical certificates by the District Administration. He further said that the Punjab government is in constant touch with the other states and more trains would be started in coming days so that maximum number of people can be sent to their home states.
He informed that to bring in transparency and increase efficiency, the District Administration Ludhiana has a barcode on the medical slip, which is being issued to the passengers. He informed that the barcode is scanned when the passenger reaches Guru Nanak Stadium for screening and getting tickets.
He said that today, trains departed for Purnia, Sitamarhi, Azamgarh, Gorakhpur, Basti, Unnao, Gonda, Jaunpur, Hardoi and Akbarpur from Ludhiana. He also thanked other officials for conducting the smooth operation of trains.
The Deputy Commissioner informed that till date, a total of 5214 samples have been taken, out of which report of 4831 has been received, report of 4578 samples is negative and report of 383 samples is pending. He said that now, the total number of patients related to Ludhiana is 176, while 77 patients are related to other districts/states. He said that 130 patients have been cured till date and unfortunately 7 people have lost their lives. /( May 20)

2.8 lakh women and adolescent girls sensitized so far under...