Zee Cinema set to premiere one of Jr. NTR’s biggest and most awaited blockbuster entertainer ‘Aravinda Sametha’ on Nov 21

Aravinda Sametha revolves around Veera Raghava, a young scion of a powerful family, with a long violent history 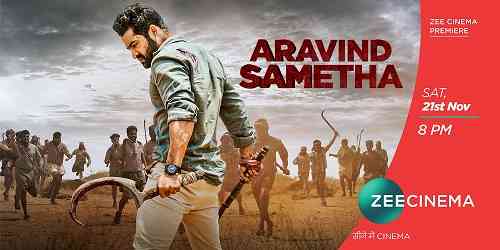 Get ready for a blockbuster treat this weekend as South ka superstar ‘Junior NTR’ is set to entertain you with his starry swag, mind blowing action and high voltage drama in the Zee Cinema Premiere of ‘Aravinda Sametha’. Directed by Trivikram Srinivas, this blockbuster action entertainer follows the life of brooding young man, Veera whose life is turned upside down after getting caught up in the feud between two villages. The talented actor and audience ka favourite star ‘Junior NTR’ will be seen essaying the role of Veera along with the beautiful Pooja Hegde as Aravinda, his love interest. Touted as one of the biggest films of Junior NTR’s career, the movie was a success at the box office in the South and garnered accolades for his fabulous performance. So, get ready for blockbuster weekend as Zee Cinema treats you with the grand premiere of the Junior NTR’s most awaited film ‘Aravinda Sametha’ on 21st November at 8 pm.

Talking about the film, Pooja Hegde said, “Aravinda Sametha is and will always be a very special film for me. This was my first film with Jr. NTR and I had a great time working with him. Personally to me, this film was an enriching experience both on-screen and off-screen. My character allowed me to explore a new side of me also in terms of dubbing for myself and I am beyond grateful that Trivikram sir helped me explore such an amazing opportunity. Needless to say, working with the man of the masses, Jr. NTR was great, we had a great blend of energies and that resulted in wonderful chemistry on-screen! Aravinda Sametha is a power-packed entertainer, a film everyone can enjoy with their family.  I’m sure the viewers of Zee Cinema will have a great time watching it.”

Aravinda Sametha revolves around Veera Raghava, a young scion of a powerful family, with a long violent history. With a decision of starting afresh, Veera moves to Hyderabad to stay away from the blood-filled past of the rival faction that led to his father’s death. Even after staying far from all the violence, time and again he comes across complex situations which is haunted by his past which makes things difficult for him. But things tend to change when Veera comes across Aravindha who helps him rediscover himself and help him find a way to put an end to this bloodshed.

Capt Amarinder urges centre to show magnanimity and support his govt in resolving...