Why love triangles never go out of fashion 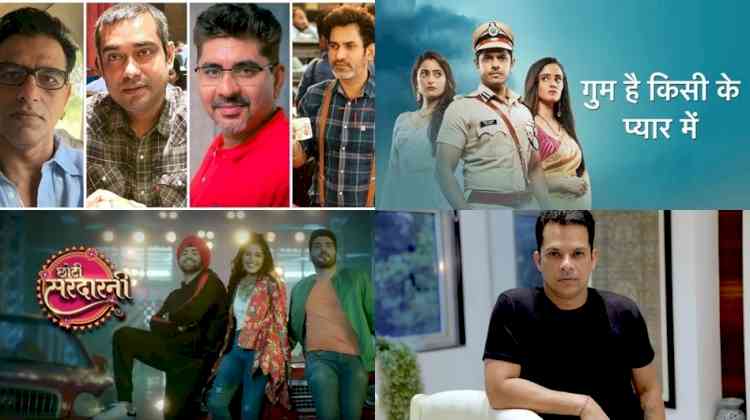 New Delhi: Love triangles in reality are most painful. Anyone going through it knows how it feels to see the person you care for, involved with someone else. But these kinds of complicated relationships have been an evergreen subject on screen.

In fact today it seems like most of the shows are keen to bring these stories and they are getting good viewership also. From 'Anupamaa', 'Ghum Hai Kisikey Pyaar Meiin', 'Imlie' to 'Saath Nibhaana Saathiya 2' – all of them have incorporated the elements of triangular relationship in one or other way.

According to producer Pradeep Kumar, 'Ghum Hai Kisikey Pyaar Meiin', these stories trends from television to digital media because audience can relate with it in one or other way.

As even in real life people at times fall in love with two souls owing to different circumstances though they struggle to find peace. He adds: "The society or relatives enjoy troubling and taunting those who fall in such kinds of relations. Thus audiences are emotionally connected with such stories."

These stories are an evergreen subject because it is all about human relationships and the complexity of love. Love triangles resonate well on Indian television.

Says Rajan Shahi, producer 'Anupamaa': "Love triangles are well received on television but how well that has been portrayed on screen is also important. To me romance with a good family plot is the perfect formula story. Love triangles can get us good TRP but sometimes it doesn't work as well. Right now yes it's in the forefront, a good story is the main thing."

So the success of such stories also depends on how beautifully they are presented and viewers slowly start appreciating them. Love triangles are helping people to learn the fact of the relationship and move on with the one who actually deserves it. These days people don't just enjoy fantasy but they actually love something they are experiencing or noticing going on in their surroundings.

Adds Uttam Ahlawat, director of the show 'Udaariyaan': "Today people do have their own experiences like failed marriage, extra marital affairs to sometimes forced arrange marriages and so these stories are not just on screen but reflect realities as well."

We all know love triangles are not the creation of today's narrative; they were there in our history, literature and mythologies. Says producer Yash A. Patnaik: "In the works of fiction, we create both idealistic characters as well as flawed characters. Flawed characters offer more opportunities to explore multiple angles to their relations and equations. Generally audiences have a liking towards flawed characters."

Thus love triangles are what is trending today and most of the directors are trying to play with the theme in one or other way. Agrees Rajesh Ram Singh, one of the producers of 'Choti Sarrdaarni': "I think it is just a coincidence that at the moment these stories have come together with different arc and circumstances."

But the question also arises why these kinds of complicated relationships and extra marital affairs are getting so much popularity. There are several sociological factors involved behind them. These relations exist because of a certain kind of vacuum created in one relationship or not getting satisfied for one or other reason.

Points out Ankit Sharma, a social scientist: "Polygamous relationship is the acceptance of the fact that a single person cannot provide both the socio-economic value and romantic elation. Monogamy is possible either in a rare blend of the two or is always a compromise of socio economic goods or romance. Love triangles manifest this tension."

Well director Ashish Shrivastav is right when he says: "Love triangles are always lapped up by the audience."

So it is a fact that love triangles are one of the most popular story angles on screen, this also historically holds true that immortal relations exist between two people only.

Indian hockey's historic feat at Olympics: Looking at Hindi films based on the sport

We are highly optimistic about the upcoming budget