Whoever dares to enter our room, is fully prepared to get roasted 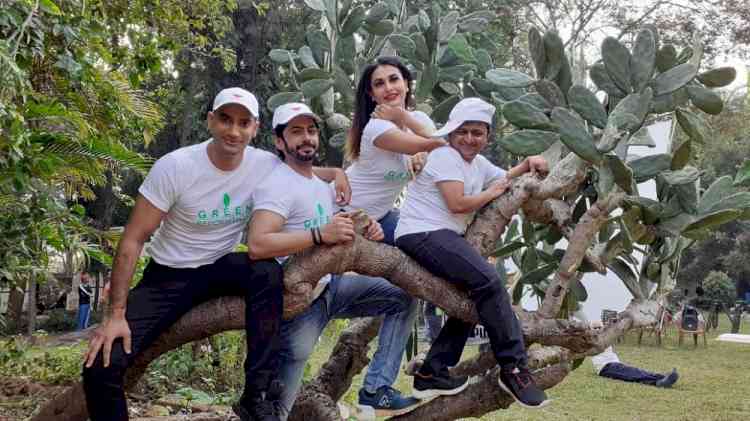 With lockdown in place and shoots on a pause, television actors have got the time to stay at home to relax and be with their families. While some are cherishing this time, many are missing their co-stars and are waiting to be back on the set.
Sony SAB’s fantasy show Baalveer Returns boasts of a phenomenal cast as it depicts the two magical worlds of Veer Lok and Kaal Lok. The members of Kaal Lok have never failed to spread their fear on screen. However, off screen, the gang including Pavitra Punia, Aditya Ranvijay, Atul Verma and Shridhar Watsar, is known to be the most fun and mischievous one. The actors share a rather special bond and are missing each other the most during these times.
Talking about her bond with the members of Kaal Lok, Pavitra Punia, essaying the role of Timnasa said, “The four of us in Kaal Lok are like best friends. Out of the whole unit of Baalveer Returns, we are the only ones who keep laughing throughout the day. We never sit in our own separate rooms and are always together in one room. We eat, sleep and shoot together. So, I am missing all of them a lot right now since we are not shooting these days. I am especially missing the food they get from home for me. Aditya gets this special homemade schezwan sauce and it’s just out of the world and all of us are crazy about it. Shridhar Ji’s wife makes some ‘moong dal ki bhaji’ which is a dry healthy vegetable and I take that away from him and finish it all by myself. Atul cooks on his own so he too gets some delicious food items and we all enjoy our lunch time together.”
Sharing about the most amusing moment from the set, Pavitra revealed, “Everyone is scared to enter the room we 4 are in, together and whoever dares to enter, is fully prepared for getting roasted. It’s like an invisible notice board outside our room which says ‘Please enter if you want to get roasted’, but it is all in the spirit of fun.”
“Everyone in the Kaal Lok gang calls me ‘Mummy’ and they treat me like the mother of Kaal Lok. So, if I am not on set for one day also, they call me up and tell me that it gets difficult for them to shoot without me on the set. It’s like something is incomplete”, she added.
Atul Verma, playing the role of Jabdali shared, “Our Kaal Lok gang believes in laughing all the time. We would usually pull Shridhar Sir’s leg to laugh or would simply look at each other’s faces and just burst into laughter. These are some things we are missing a lot. So, we have made it a point to talk to each other over video calls, these days.” Talking about special memories from the Baalveer Returns set, Atul shared, “Everyone on the set had the most fun working with Kaal Lok. The Directors would say that it is so much fun shooting with Kaal Lok as we have never seen such actors who are laughing together and eating together but also very serious for their work. This is a fact as all four of us are really fond of each other and love spending time together. Even if one of us is not coming for the shoot, we feel incomplete. We desperately want to get back to shooting. Our viewers are also missing new episodes of the show so we will be back for them soon, once things get normal.”
Shridhar Watsar, essaying the role of Tauba Tauba misses his co-stars as he said, “Although I play a double role, Duba Duba in Veer Lok and Tauba Tauba in Kaal Lok, I am more attached to the Kaal Lok gang. We are all missing each other a lot but we do catch up over calls regularly. Sometimes we even talk late nights around 2-3 am and go on for about an hour or so.. We have a very special bond and that definitely translates on screen as well. I also feel amazing shooting for scenes of Kaal Lok as there is a lot that you can do there. So, I am waiting to get back to shooting with a lot more enthusiasm and newness.”
Aditya Ranvijay, who plays the role of Bhaymaar, added, “The bond all four of us share is just magical and this makes it a bit difficult for us to be apart from each other. On the sets, we would always be with each other, at any given point of time from the morning tea to leaving the set in the evening. Out routine would include pranking each other but everyone used to be very sporting towards it. I used to bring homemade laddoos which everyone on the set used to eat. Now that we are not shooting, everyone must be missing that as well. I hope we are able to resume shooting soon and I request everyone to stay home and stay safe.”

Zee Cinema and Boney Kapoor come together to release ‘It’s...

Romance all the way