We look forward to having peaceful dialogue with Chinese authorities 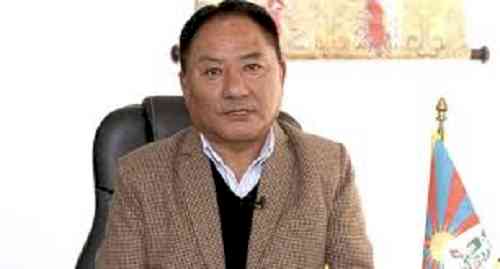 Dharamshala: Speaker Pema Jungney of Tibetan Parliament-in-Exile, on behalf of the 16th Tibetan Parliament-in-Exile congratulates Suresh Kashyap on being elected as the 13th Chief of the Bharatiya Janata Party (BJP) in Himachal Pradesh.
In the congratulatory letter written to Kashyap, the Speaker wrote, “Our Parliamentary Delegation had the privilege to meet and interact with you during the meeting in February this year at Bilaspur (Himachal Pradesh).”

“On behalf of Tibetans inside and outside Tibet, we express our deepest and profound gratitude to the People and Government of India for the support and assistance given to the cause of Tibet and the Tibetans for more than 60 years in exile particularly to the Himachal government and its people. Himachal is where the residence of His Holiness the Dalai Lama and headquarters of Central Tibetan Administration is based,” he wrote.

The Speaker further wrote, “Like a vision of His Holiness the Dalai Lama, Through the Middle Way Approach we seek genuine autonomy within the framework of the People’s Republic of China serving the interest of both China and Tibet. We also look forward to having a peaceful dialogue between Chinese authorities and envoys of His Holiness the Dalai Lama which has come to a standstill after the 9th round of Negotiation in January 2010. We hope your party will help to resume peaceful dialogue and continue to support our cause.”

“Honourable sir, your party has been very supportive of our cause. We hope and believe that you and your party will continue to render firm support under your leadership. As per His Holiness the 14th Dalai Lama’s wishes, we are establishing a Legislative Tibet Support group from every major Tibetan living States, therefore, We enthusiastically look forward to reviving the Himachal Legislative Tibet Support Group which will be a huge support and contribution to our cause,” he wrote.
The Speaker concludes the letter writing, “Once again, congratulations, and I wish you and your party under your president-ship a great success and best wishes for the endeavours ahead.”

Ashraf Ghani should face trial for fleeing in most disgraceful...