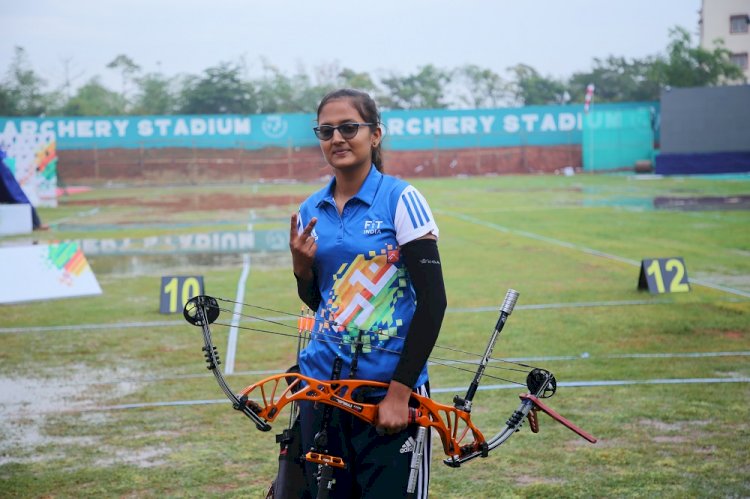 Amazingly, archery wasn’t even her first-choice sport. “I wanted to play volleyball or badminton, just like my father. But back home in Ajmer, there weren’t proper facilities for either sport,” Kritika revealed, just after her medal-winning effort.

As luck would have it, things were much better for archery. “There was a lot of scope for archers in Ajmer and my father encouraged me to learn it,” she added.

The 19-year-old, representing Rajasthan University at the KIUG here, outshone everybody on a rainy day to probably get her first big breakthrough.

Young Kritika looked completely at ease during the finals on Tuesday. But that’s because this wasn’t her first Khelo India experience.

“I took part in the Youth Games in Guwahati too,” she pointed out. “I had a nice run there as well but lost in the quarter-finals. Here, I must say, I was feeling good right from the beginning. I felt very confident during the final and I guess I played well enough,” she added, pointing to her gold.

Kritika is the fourth of five daughters of Badri Vishal Sharma, a successful sportsperson himself. Her sister Prerna is also an accomplished archer.

“Kritika and Prerna are both very hard working and I believe talented too. Kritika has won gold in the all-India University Games too, in the mixed compound while Prerna is a national-level player,” Badri said.

He proudly declared that he always wanted his daughters to pick up some sport and that he never had a conservative mindset when it came to them.

“Lots of parents are very conservative but I’m not like that. I have five daughters and all of them are really good in studies as well. I’m really proud of each of them. I had a coach for Kritika but couldn’t afford it, so I started coaching her and Prerna myself. Now, I go with my daughters to all their tournaments,” Badri added.

Kritika now has her sights on the senior World Cup trials later this month. “I have been doing well and I hope I get selected there. This medal is a huge boost for my confidence and will surely help me when it comes to the crunch,” she said.

My parents have worked day and night to support my judo...

No stopping Haryana in kabaddi as state pockets all four...