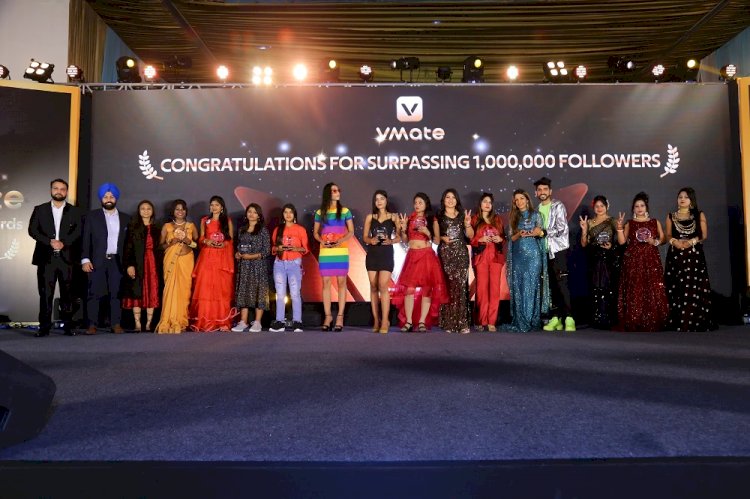 New Delhi: VMate – the trending short video platform, recently concluded its Annual Awards 2020 in New Delhi. VMate invited more than 200 creators from across the country to join the celebrations and felicitated top achievers under various categories - creator's follower base milestones and special awards. Many creators also participated in the ceremony to make the event livelier with their performances.

Among the achievers, Artist Sharleen was recognized for building the most extensive base of 3 million followers on VMate. 6 more creators were felicitated for surpassing 2 million followers each. Acknowledgements were also given to 20 creators and other 35 creators for exceeding 1 million and 5 lac followers categories respectively. The top VMate  creators like Artist Sharleen, Naina Jee, Komal, Anju and others are earning over 2 lakh a month for making entertaining videos. For many creators, VMate platform is the main or the only source of their income.

Besides, 21 special awards were distributed to felicitate the best creators and agencies for their work on VMate platform. Among others, Naina Jee was recognized as the Rising VStar of VMate and Komal was recognized as the best regional Ambassador of VMate 2019. Other popular creators such as Guruchela magic, Goku fitness, Jyoti Shiv, Shalu and more were also acknowledged under various categories.

Since the award ceremony co-concluded with VMate's blockbuster campaign #HappyValentinesDay, the event participants also witnessed the announcement of the campaign's ultimate winner – Fahad Ahmad. Fahad and team are popular among their fans for playing cross-gender roles and making funny videos. To participate in the campaign, the duo posed as wife and husband to create hilarious videos and also used the #SunnyKiDate sticker creatively.  Fahad and his shy wife, used their wit to emerge as winners.  As the V-Day campaign winner, Fahad has secured a brand new shinning car for himself. Overall, VMate's VDay campaign saw over 6 lakh videos created around its theme. Fahad, too, was among the enthusiastic participants to reach the wheel of fortune stage and became lucky on spinning the virtual wheel.

The felicitation ceremony was then followed by high energy performances by super talented VMate creators. Magic show, acrobatics, balancing acts and some other exciting acts were performed on the stage. Some creators decided to leverage the stage to give out a social message. A classy fashion show became the highlight act of the evening and received an overwhelming response from the audience.

On the Annual Award ceremony, Ms Nisha Pokhriyal, Associate Director, VMate commented “VMate encourages creators from all kinds of backgrounds to show their talent and creativity on the platform. In 2020, we will invest more on good content creators and promote them to become famous within and outside VMate community. The compensation includes a higher price for top videos, promotion fees for top creators, training courses to improve shooting skills and creativity. Also, more content-based contest and bigger prizes.”

As an actor, giving auditions is a part of my job