Mirakle is available in both regular and sugar free variant 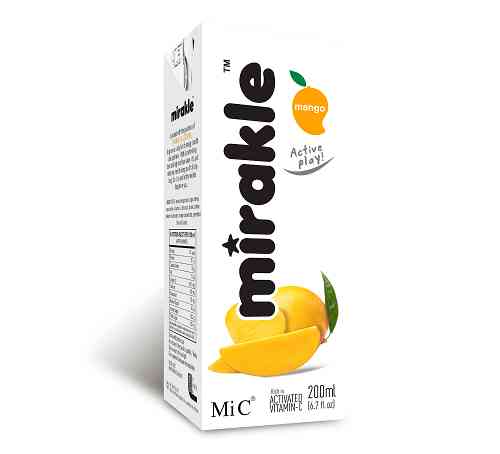 Chennai: Mirakle, a drink infused with 1000mg of Vitamin C, was launched by ABT Limited in the market. This mango flavored drink is a preventive supplement that can be consumed to boost one’s immunity, and comes in a Tetra Pack. Approved by the FSSAI (Food Safety and Standards Authority of India ), the juice pack is available for INR 30 all over Tamil Nadu in retail stores and on online store Amazon.in for rest of the consumers in India. Plans of retail distribution across country are on the way.
Vitamin C is known for its properties to enhance one’s immunity and fight various viruses. Mirakle has the highest density of Vitamin C of any product available at present as Nano-particles are delivered in a liposomal method. Elements such as Lysine and Proline buffered with 3000 mg of Phospholipids in a Liposomal form, is used to its full efficiency to help contain this global crisis.
Commenting on the same, Dr. Pollachi Manickam Mahalingam, Chairman, ABT Limited said, “It gives us immense pleasure in bringing this health drink amongst us all in a time like this. Given the viral infections that are being discovered every-day, coupled with our current lifestyle, there is a dire need to stress on building and improving one’s immunity. Mirakle is a supplement that can help boost one’s immunity and fight diseases which is the need of the hour. Mirakle contains Liposomes, which are 4 times more effective than an average IV drip and in addition is 20 times more effective than oral delivery Vitamin-C methods.”
Further adding to this, Dr. Manickam said, “The product is now available with sugar and we expect to launch a sugar free version as well in the next two weeks. We hope to ramp up production depending on the market demand and then introduce few other variations to boost immunity and health. All diseases share a common issue of nutrition and deficiency of certain nutrients which does not allow the body to respond to the external stimuli and save itself.”

Nissan Magnite SUV to be launched in India on Dec 2

To beat heat this year, Crompton unveils its ‘jaldi cooling’...