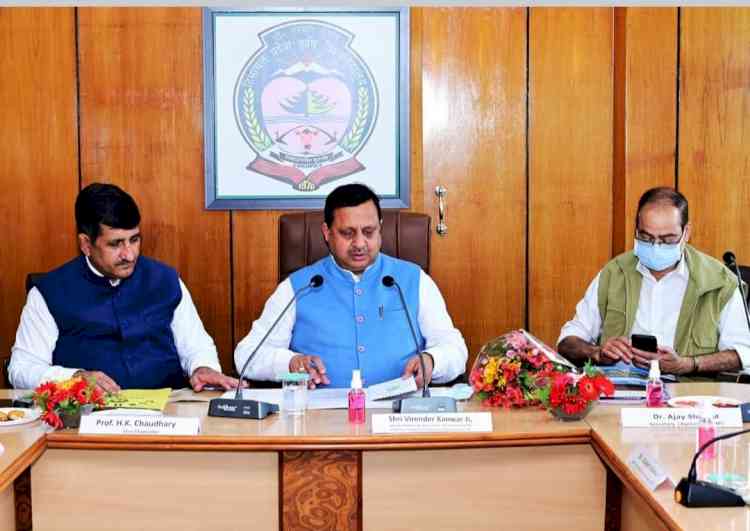 Dharamsala: Virender Kanwar, Minister of Agriculture, Animal Husbandry, Rural Development and Panchayati Raj, Govt. of H.P. has exhorted the scientists and farm officers to make the state sel- reliant on seed requirements of major crops. The Minister was chairing a meeting of scientists and officers at Chaudhary Sarvan Kumar Himachal Pradesh Agriculture University at Palampur today.

Kanwar said, “The progressive farmers should be involved in massive seed production programmes and efforts should be made to make Himachal Pradesh self-sufficient in its seed requirements to save resources and have checks on quality.  There was a boom in agriculture and horticulture during the pandemic as a large number of people have adopted farming after returning to their roots  from big cities. Industrialization propelled migration from villages to cities and some people considered farming inferior and now youngsters want to join petty government jobs. Such people should be given different farming models so that they gladly adopt agriculture, horticulture, animal husbandry, fisheries, etc.”

He recalled the times when farmers used to grow cereal and pulses , rear milch cattle and other animals but they abandoned such integrated systems of farming due to the green revolution. He also underlined the need to check unauthorised sale and quality of insecticides, pesticides, animal feed and other farm inputs.

Kanwar said,” only  research is worth which is useful to the farming community. This  University should  make serious efforts to become self reliant by enhancing domestic income. Scientists should  adopt a limited number of farmers in each Panchayat and train them to adopt natural farming or other models of farming for more income and  safe food production.”

Prof H.K.Chaudhary, Vice-Chancellor, detailed major achievements in academic, research and extension education activities. He said that the University was committed to work relentlessly for the socio-economic development of the farming community with quality human resources development, need based research  and transferring the useful technology to the nook and corner of the State. He also informed about  new research endeavours like the recent release of 13 crop varieties and efforts to register 51 technologies in the Golden Jubilee year of the State, work on producing only female calves, work on  Pahari cows, conservation of genetic resources and creation of seed gene bank, new MoUs, etc. The Vice-Chancellor expressed his gratitude to the Govt. of H.P. for constant support and sought funds to the tune of Rs.4.50 crore for the compound wall of the University.

Shri Pankaj Sharma, HAS, Registrar welcomed the Minister and other dignitaries.

Earlier, the Minister inaugurated research projects and infrastructure worth Rs.1.23 crore including a project on conservation and propagation of Gaddi dogs worth Rs.78 lakh, layer poultry house worth Rs. 20 lakh and hydroponic unit worth Rs.25 lakh. The Minister visited a natural farming unit and veterinary clinics.

History of Congress party to politicize by dividing society on basis of caste and...