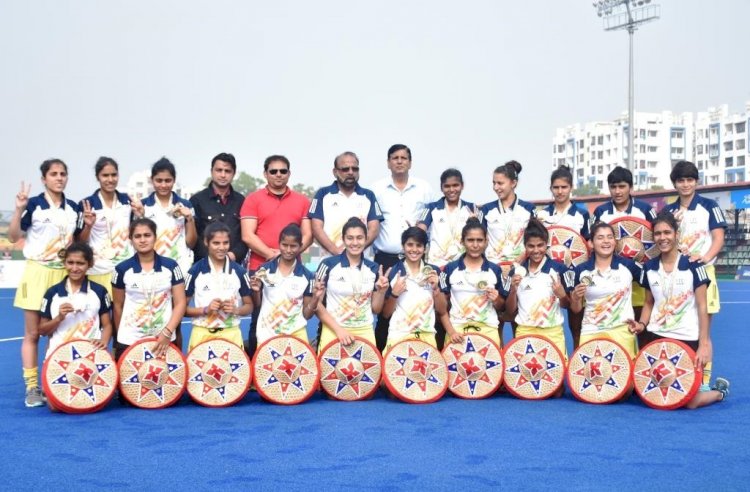 Haryana's U21 Girls won the Gold Medal at the Khelo India Youth Games 2020.

Guwahati: A highly exciting and entertaining last day of the hockey competitions here at the Khelo India Youth Games 2020 saw Uttar Pradesh and Haryana bag the gold medals in the U21 Boys and U21 Girls competitions respectively after winning their final matches here at the Maulana Md. Tayabullah Hockey Stadium on Tuesday. In the U21 Boys category, Uttar Pradesh defeated Haryana 3-1 in a penalty shootout after the two teams had earlier played out a goal-less regulation time. Whereas, the U21 Girls category saw Haryana beat Jharkhand 5-3 in a high-scoring encounter which saw the latter thrice equalize, only to concede twice in the last nine minutes.

The bronze medal in the U21 Boys category of the Khelo India Youth Games 2020 was won by Odisha, who defeated Chandigarh 3-1 in a penalty shootout after a high-scoring normal time which saw the two teams tied at 5-5. In the U21 Girls category, Maharashtra broke Mizoram's hearts as they won by a single goal.

The U21 Boys Final of hockey in the Khelo India Youth Games 2020 proved to be a tactical masterclass from both the coaches, who tried to avoid a repeat of their Pool B match earlier which Haryana won 3-2. On the big day, however, both the teams tried to cut down on the number of circle penetrations, and were successful in doing so as the game finished 0-0. The game was finally decided in a penalty shootout where Uttar Pradesh prevailed as Vishnu Kant Singh, Uttam Singh and Gopi Kumar Sonkar converted their chances, with their goalkeeper Pawan denying opponents' Abhishek, Mohit and Pankaj Jr to help his side to a 3-1 win in the shootout, and the gold medal.

Meanwhile, the U21 Girls Final was the opposite, as both Haryana and Jharkhand played attacking hockey, scoring a total of 8 goals between them. It was Haryana who prevailed with a 5-3 win, but Jharkhand gave them a tough fight, equalizing thrice in the match, before conceding the fourth and fifth goals. Goals for Haryana in their gold medal victory were scored by skipper Gagandeep Kaur (24', 59'), Reetom Prakash (13'), Mahima Choudhary (46') and Usha (51'), while Albela Rani Toppo (21', 33') and Sangita Kumari (48') scored the goals for Jharkhand.

In the U21 Boys' bronze medal match, Odisha and Chandigarh produced an entertaining match for the spectators, with the two teams scoring 5 goals each in regulation time. It was Odisha who were trailing by 1-3 after the first 25 minutes, but made a great comeback to level the scores at 4-4 after 44 minutes, and then score a fifth in the 59th minute to turn the match around. However, it was Chandigarh's turn to equalize as they scored in the last minute to make it 5-5 and take the tie into a penalty shootout. It was Samir Ekka (15', 28'), Abhisek Lakra (38'), Rahul Ekka (44') and Amandeep Lakra (59') who scored the goals for Odisha, with Maninder Singh (25', 36'), Diljeet Singh (9'), Harpreet Singh (13') and Sanjay (60') scoring for Chandigarh. In the shootout, Odisha's goalkeeper Sahil Kumar Nayak saved the first three attempts and Sushil Dhanwar, Sunit Lakra and Krishna Tirkey scored, to win the bronze for their team.

The U21 Girls bronze medal went to Maharashtra who succeeded in defeating Mizoram 1-0. It was a well-fought match between the two teams, and Mizoram also had chances to score, but it was Maharashtra's Pooja Bhanu Das Shendage who scored the only goal of the match in the 36th minute to win the bronze medal for her state.

The results of U21 hockey competitions of the Khelo India Youth Games 2020:

The medals winners from hockey at the Khelo India Youth Games 2020:

Govt schools prove their mettle in 3rd edition of school...