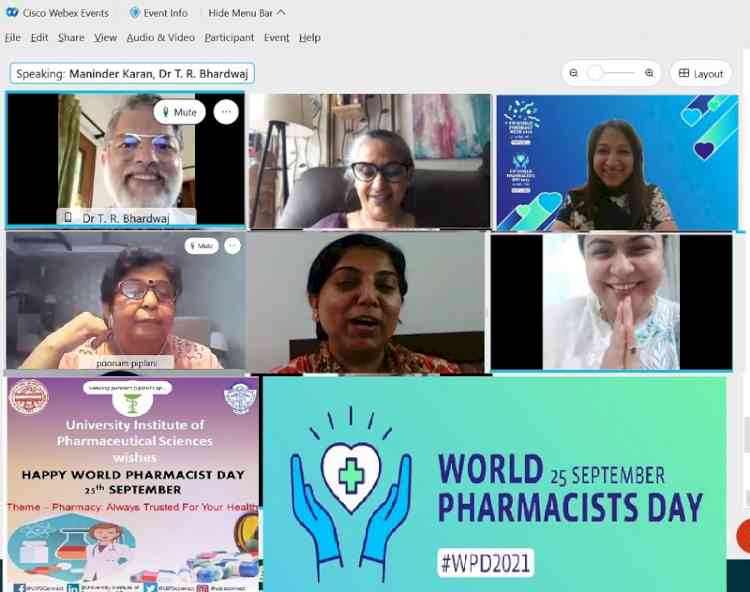 Chandigarh, September 25, 2021: University Institute of Pharmaceutical Sciences, Panjab University, Chandigarh, and Indian Pharmaceutical Association (IPA), Punjab branch successfully organized an international webinar on the occasion of World Pharmacist Day i.e. 25th September. The talk “Regulatory affairs and its role in pharmaceutical industry” was delivered by Ms Vibha Malhotra, Regulatory Affairs, Pfizer/Viatris, Sydney, Australia, an alumnus of UIPS.
Professor Indu Pal Kaur, Chairperson, UIPS & Secretary, IPA, Punjab Branch, extended a cordial welcome and emphasized on the role of pharmacy professionals in various regulatory processes.
Professor Poonam Piplani, Convenor, Lecture organising Team introduced the esteemed chief guest and noted speaker of the day. The Chief Guest of the event, Professor Tilak Raj Bhardwaj, Advisor to the Chancellor, Baddi University of Emerging Sciences and Technology, Baddi (Solan), Himachal Pradesh, Former Vice-Chancellor, BUEST and Former Chairperson UIPS, highlighted the role of India as "Pharmacy of the World" and also the emerging scope of Pharmacy in India.
Ms Vibha Malhotra initiated her talk by introducing the concept of regulatory affairs (RA). Citing the examples of the Elixir Sulphanilamide and Thalidomide disasters, she apprised the students of the evolution of regulatory affairs in the world and the role of rigorous regulatory checks that a pharmaceutical product undergoes for ensuring safety and efficacy on its path from the laboratory to the clinics. She further elucidated the significance of pharmaceutical regulatory bodies in the world, and threw light on the liaison role of RA professionals and their expertise in making workable plans for different regulatory processes.
The talk was followed by an enthusiastic round of Q/A session involving students, researchers as well as UIPS faculty. The talk was successfully concluded by a vote of thanks and felicitation by Professor Indu Pal Kaur.