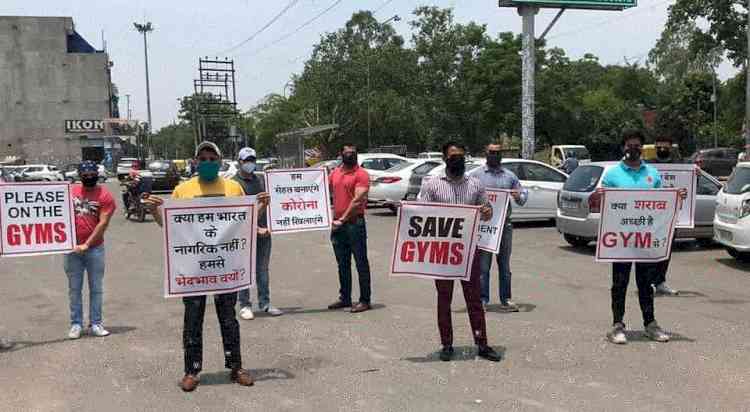 Gym owners protesting against delay in reopening of gyms under the banner of Tricity Gym Owners' Association(TGOA).

Mohali: Gym owners who are members of Tricity Gym Owners’ Association (TGOA) - the association which is the representative body of gyms operating in Tricity, held a peaceful protest at Phase XI, Mohali, by adopting all safety measures like social distancing and wearing of masks etc  to focus attention on the ‘near collapse’ of the fitness & gym industry in tricity, due to repeated lock-downs. The gym owners who numbered about 10 also raised their concern against the delay in reopening of gyms. The gym owners are also miffed at what they feel is a step motherly treatment of government being meted out to the industry. Their contention is that despite Unlock 1 seeing another client interaction based industry – ‘salons & hair dressers’ reopening and even restaurants & malls slated to reopen on June 8, the government is ignoring & delaying reopening of Gyms.

Sanjeev Kumar, President, TGOA said, “The prolonged lock-down has meant financial distress for owners of the 200 fitness centres & gyms spread across tricity. Another issue is that as many as 3000 employees have had to go without pay for the last over 2 months. Despite writing to Advisor to Administrator, Chandigarh (UT), DC, Chandigarh , DC, Mohali and DC, Panchkula and asking for reopening of gyms under standard operating procedure, there has been no positive response. This has forced us to protest under the banner of TGOA by holding placards which showed different problems the industry is facing due to lock-down.”

The TGOA has also sent a letter to the Prime Minister asking for his intervention to resolve the problems of the industry in tricity. These mainly include the financial burden on gym owners as well as large scale unemployment being faced by trainers, sales staff, spotters, house-keeping staff etc.

Preetpal Sandhu,Vice President, TGOA said, “The protest was necessary to attract attention of administrations in tricity as well as the central government towards our beleaguered industry. Currently the situation is so pathetic that many centres are not in a position to even reopen due to heavy financial liabilities. The main component of expenses is the rental amounts. We have requested the administration for a financial bailout package for gyms and also reiterated this demand to honourable PM.”

Abhishek Gagneja, Secretary, TGOA said, “We also brought into focus during the protest another aspect which is being ignored by government. The point we brought upfront was the fact that gyms could prove to be places where one can develop immunity to fight the nCorona virus. Gyms provide better physical fitness and scientifically delivered exercise regimens which could be helpful in the current scenario.”

Suraj Bhan, General Secretary, Chandigarh Body Building Association said, “I represented the Chandigarh Body Building Association in the protest through which we body builders have raised the problems being faced by us, due to the delayed reopening of gyms. We are losing our fitness and also the muscles we developed by working so hard. We have to compete in body building meets and if gyms do not reopen in a fortnight or so, our livelihood will be affected, as we are losing our built muscles due to lack of gym training.”

The gym owners said that the operations of gyms will be done under a highly effective SOP (Standard Operating Procedure) which will help in keeping the virus at bay.

Efforts to be made to take anti-covid `mission fateh’ to grassroots level: DC