Timnasa gets worried about her death 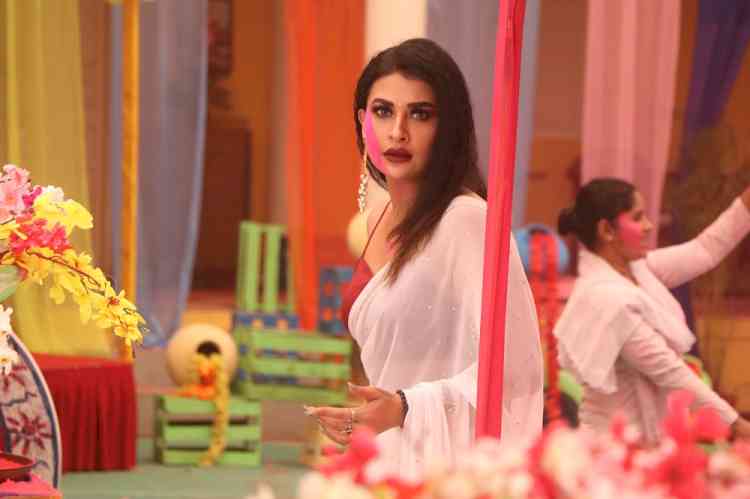 Vivaan (Vansh Sayani) and Debu’s (Dev Joshi) society, Bharat Nagar is all set to celebrate the festival of colours, Holi with full pomp and show but little do they know that Timnasa (Pavitra Punia) has equally grand plans to destroy everyone in order to get hold of Nakabposh (Dev Joshi). The upcoming episodes of Baalveer Returns, for the first time will witness Timnasa scared for her life as a mysterious figure is determined to destroy her existence. The viewers must brace themselves to witness Timnasa celebrate Holi while donning a saree and while plotting her vicious scheme to kill entire Bharat Nagar.

Timnasa who is on a quest to destroy the world and its protectors is braced for a new challenge with the emergence of a masked savior, Nakabposh. The upcoming episodes will also witness, Timnasa leaving no stone unturned to expose and killing Nakabposh in order to destroy the secret that can lead to her death. To execute her plan, Timnasa takes a disguise by donning a saree and participates in the Holi celebration in Bharat Nagar with evil intentions to lure Nakabposh into revealing himself.

On the other hand, Debu stands successful in solving the puzzle and secures the next clue to learn the secret to kill Timnasa.

Whereas in Bharat Nagar, Bhaymaar (Aditya Ranvijay) and Tauba Tauba (Shridhar Watsar) adulterate the colors with some  poison and people start fainting. Nakabposh shows up at the right moment and with Vivaan’s help, he successfully extracts all the venom and saves everyone.

What is Timnasa’s secret of her death? Will Nakabposh aka Debu be successful in finding the secret?

Pavitra Punia, essaying the role of Timnasa said, “Timnasa till now was someone, who can’t be killed. She had protected the secret of her death for the longest time but now she stands the risk of losing her life as Baalveer aka Debu has found a clue to her secret. Knowing Timnasa, she will not stop till she kills Nakabposh and Vivaan to save herself. The upcoming episodes are only going to get much more thrilling and the viewers should brace themselves for action packed episodes further as Timnasa always has a plan up her sleeves and she stops at nothing.”

Dev Joshi, essaying the role of Baalveer, Debu Bhaiya and Nakabposh said, “Baalveer is now seen playing two more characters which are created to deal with various situations and to keep Timnasa confused. Debu aka Baalveer has come another step closer to learn the secret of killing Timnasa. He is also maintaining his disguise as Nakabposh to save the world whenever Timnasa creates chaos. The story has taken an exciting twist and will present some interesting revelations for our viewers. So, stay tuned.”

Khaali Peeli trailer is out now

Aakanksha Singh trains in hockey for her Tamil Debut