The Yacht Club of Hyderabad expands to Durgam Cheruvu 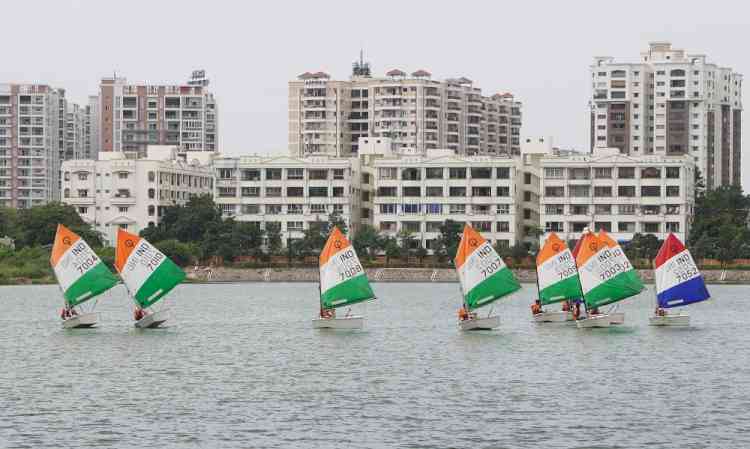 Mr.Arvind Kumar IAS, Metropolitan Commissioner and Principal Secretary Govt of Telangana was the chief guest at the preview. 20 young sailors of Hyderabad sailed the waters including the tricolour sailors in celebration of Independence Day along with Mr.Suheim Sheikh Head Coach and President of the YCH Foundation

The entire Durgam Cheruvu park is designed to serve as a recreational and sporting green spot in the middle of the city with a walking and cycling path around it and lots of greenery and green space said Mr Arvind Kumar, Metropolitan Commissioner and Principal Secretary Govt of Telangana, speaking on the occasion.

According to Mr. Suheim Sheikh, the Yacht Club of Hyderabad will conduct classes and also run regattas at Durgam Cheruvu in future.

The Yacht Club will continue its activities at Hussain Sagar Lake.

The picturesque Durgam Cheruvu amid Cyberabad will spring to colour and life with the said, Mr. Suheim Sheikh.

With 86 State and National medals, multiple National Titles and three of its wards being selected for the Asian and World Championships, the YCH Foundation reaffirms its dedication to the nation with a display of the tricolour lighting up the very waters that also played a key role in nurturing the 4 Indian Sailing Olympians at Tokyo 2021 during their formative years.

The Credo of the Yacht Club is Dignity through Sports.

Results of fourth round of league matches

Hyderabad, Bengaluru square off in big game at Vasco

Doing well in Dhaka is important for us ahead of a busy...