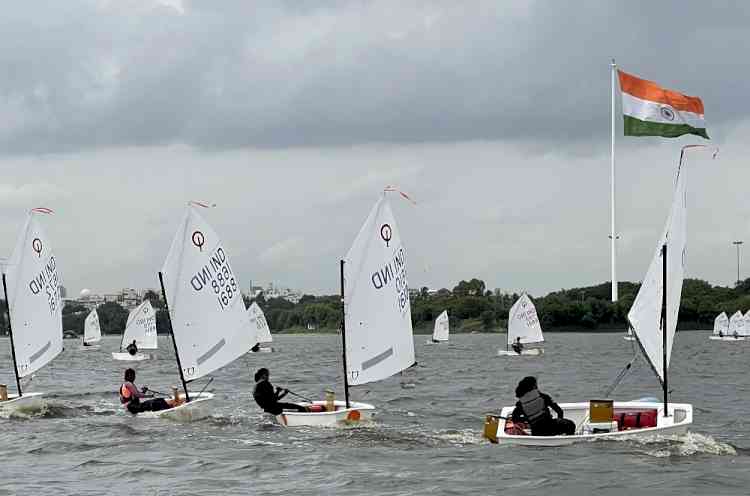 Sailors at the Practice Race of the 12th Monsoon Regatta.

Hyderabad: As the monsoons rage across India the coastal sailing locations become un-sailable and Hyderabad lights up with little sails dotting the waters of Hussain Sagar.

The Monsoon Regatta has always been the largest congregation of sailors below 15 years and this year  again 62 sailors from across India will participate in the famous challenging monsoon winds of about 18-25 knots all vying for metal and the coveted Monsoon Regatta Trophy earlier won by none other than Vishnu Sarvanan currently at the Olympics at Japan.

For 12 years in succession the Monsoon Regatta, a National Ranking Championship under the aegis of the Yachting Association of India has been the nursery for young sailors most of which have represented India across the world and three of the four Sailing Olympians at Tokyo, Ganapathy Kelapanda, Nethra Kumanan and Vishnu Sarvanan have participated in the Monsoon Regatta at Hyderabad at various stages of their careers.

“We are proud to host the 12th Monsoon Regatta at Hussain Sagar and look forward to the tight competition and some great action on the water as these results will decide who represents India at the Asian Championships at Thailand”, said Lt. Gen KS Rao of the Telangana Sailing Association.

Eklavya Batham of Bhopal is India No. 1 and top seed and claimed top spot at the practice race conducted today proving his superiority after having a poor start but catching  at the last leg trouncing local girl Ravali Parandi to the second position.

The girls will have a tight competition between two of the same state of Telangana with India No. 1 Jhansi Priya Laveti and No. 2 Vaishnavi Veeravamsham  also just returned from the Worlds and practicing hard. Ravali Parandi also from Hyderabad ranked No.3 in India is the dark horse likely to hit the top spot given her current form and beating all the girls to finish second overall after Batham

Challenging the local girls will be Neha Thakur and Divayanshi Mishra of Madhya Pradesh.

“Having three top seeds from Telangana is a matter of pride for Telangana and we hope to get a few great results this time in home waters “ said Suheim Sheikh the Coach and President at the Yacht Club Foundation.