Telangana man who built KCR temple puts it on sale 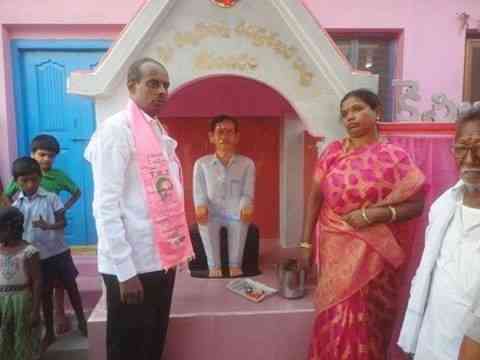 Hyderabad, Sep 21 (IANS) A fan of Telangana Chief Minister K. Chandrasekhar Rao, who built a temple with his statue in it, now has put it on sale as he says he has lost reverence for him.

Gunda Ravinder, once a staunch follower of KCR, had built the temple in 2016 with KCR's marble statue in it at his house in Dandepalli mandal headquarters in Mancherial district. Ravinder and his family used to worship the popular leader like a god.

Ravinder, who claimed to have actively participated in the Telangana movement, used to proudly showcase the temple as his reverence for Telangana Rashtra Samithi (TRS) chief. "Beloved son of Telangana and hope of four crore people," are the words inscribed in the temple.

He spent Rs 3 lakh on building the temple and installing the statue. He claimed to have taken loans for this and for participating in the movement.

Today, he has covered the statue with bags and wants to sell it to repay the loans.

Ravinder alleged that after formation of Telangana state he did not get the due recognition in TRS. He says he did not even get an opportunity to meet KCR or his son KTR.

He also claimed that some leaders in the party did not allow him to come up and he lost even cable TV network, which was his only source of income.

Ravinder, who recently joined BJP, has posted on social media that he wants to sell KCR's statue and temple.

BJP leader crushed to death in UP district

NCP says Cong must rise to the occasion being the oldest...

Yemen blast victim regains ability to walk with help of...