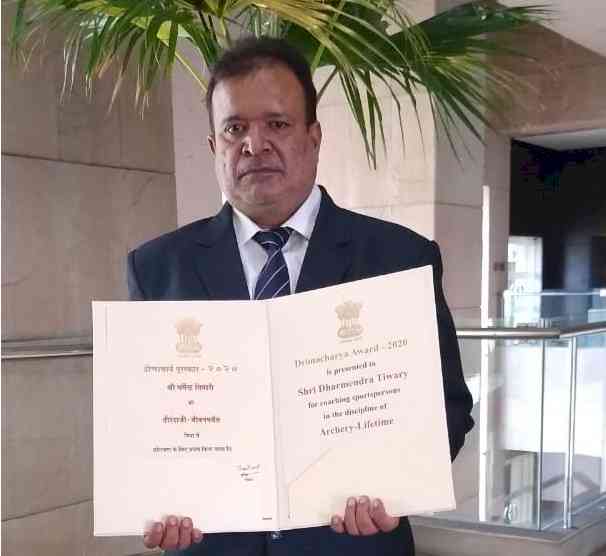 Chandigarh: Shri Dharmendra Tiwary, today, has been conferred the prestigious Dronacharya Award 2020 by the Hon’ble President of India for his contributions to Archery-Lifetime. Shri Dharmendra Tiwary, Chief Coach, has been associated with TAA since its inception in 1996. Tata Archery Academy (TAA) is extremely proud to add yet another feather in its cap and the entire Tata Steel family congratulates him on this great feat.

Tata Steel celebrated the National Sports Day by reaffirming its commitment to Sports and honouring the sports legends of the country. The Company remembered the visionary Sir Dorabji Tata and honoured country’s hockey legend, Major Dhyan Chand, for their unparalleled contributions to the Indian sports. India celebrates National Sports Day on the birth anniversary of hockey star Major Dhyan Chand, who won three gold medals in Olympics for India in 1928, 1932, and 1936. Sir Dorabji Tata was the first president of the Indian Olympic Committee and financed India’s very first contingent to participate in the world’s biggest sporting event - Olympic Games in 1920.

Speaking on the occasion, Chanakya Chaudhary, Vice President, Corporate Services, Tata Steel, said, “Today is a proud day for each one of us at Tata Steel and Jamshedpur. We are delighted that Shri Dharmendra Tiwary has been awarded the prestigious Dronacharya Award 2020 for Archery. We thank him for his contributions and congratulate him for bringing glory to Tata Archery Academy, Jamshedpur. It is an honour to have him guide our young sportspersons and lead them to become world-class archers.”

“Sports is an integral part of Tata Steel’s cultural fabric. We will continue to strive to take forward the legacy of Sir Dorabji Tata to encourage Sports. In this spirit, we at Tata Steel celebrate the National Sports Day and reaffirm our commitment to Sports”, he further added.

The Sports Division of Tata Steel conducted various virtual sports activities ranging from Fun Sports and Health Awareness, workshops, followed with a webinar for TT players, Handball players and coaches, Yoga Competition, online chess, plank competition, and Karate championship among others. These activities were organised from August 13-28. The entire series saw participation from more than 500 sportspersons and coaches. A webinar with former cricket legends was also conducted on Aug 27 that saw participation of Arun Lal, Saba Karim, Rajesh Chauhan and Maninder Singh as Panelists.

Sports has always been a prominent aspect of Tata Steel’s culture across generations. Right from Sir Dorabji Tata personally sponsoring the Indian Sports team to the Antwerp and Paris Olympics to building numerous institutions like, the Willingdon Sports Club, the Parsi Gymkhana, the High Schools Athletic Association or the Bombay Presidency Olympic Games Association, it was Sir Dorabji’s love and passion for sports that has uplifted numerous sportsperson in the country to achieve their full potential. The zeal of Sir Dorabji Tata for sports has been kept alive even during the current pandemic by Tata Steel through various sports activities and related efforts. Tata Steel will continue to uphold and celebrate his legacy and further his vision. Tata Steel has won 2 Rashtriya Khel Protsahan Awards and has produced 1 Padma Bhushan, 11 Padma Shri, 1 Khel Ratna, 1 Dhyanchand Lifetime Achievement, 6 Dronacharya and 41 Arjuna awardees in the field of sports.

One lady from Himachal has become first female regional...