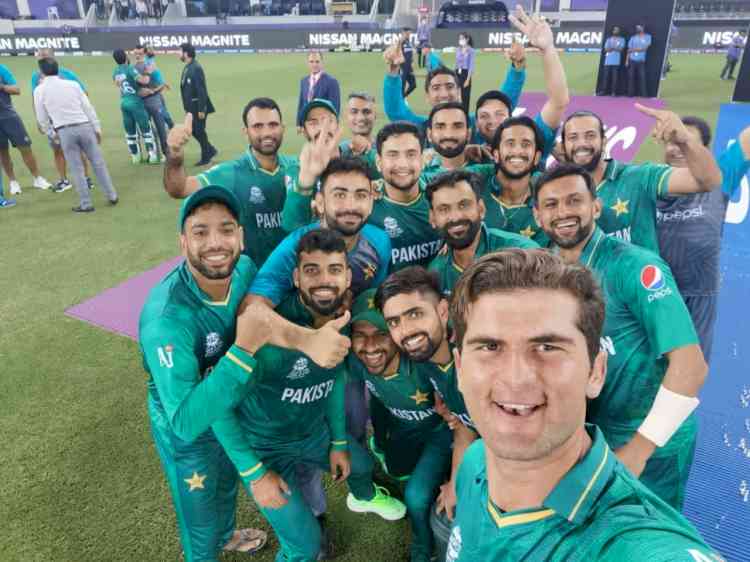 Dubai, Oct 25 (IANS) Pakistan pacer Shaheen Shah Afridi said that it was a really good feeling to secure a win against India in the ICC men's T20 World Cup. He added that the team had a plan and it was just about executing it.

Afridi set up Pakistan's crushing ten-wicket win over India in Dubai on Sunday, as the 2009 champions broke their losing streak against the 2007 champions in 20-over World Cups. His opening burst claimed Rohit Sharma and KL Rahul in power-play. In his final over, he took out India skipper Virat Kohli, thus applying brakes to Ind'a's finishing touches. Overall, he had figures of 3/31 in four overs.

"To be honest, a really good feeling to win against India in World Cup. It is a special thing for us Pakistanis. First of all, congratulations to the whole of Pakistan. They all were sitting and praying for us. So yeah, I think we had a plan and just executed it," said Afridi in the post-match press conference on Sunday.

He also credited his skipper Babar Azam and wicketkeeper-batter Mohammad Rizwan for putting up an unconquered partnership of 152 runs, which helped Pakistan get over the line with 13 balls to spare. "The way Rizi (Rizwan) and Babar finished the game and the way they're playing, I think credit goes to these two. They were like a one-man army swinging the bat. It's good for Pakistan to start good in our first game. We're looking forward to more games."

Talking about his approach with the ball, Afridi explained, "I think this is also the first time that I bowled three overs in power-play. The ball was moving a bit and I was trying to give a breakthrough for the team as it was a requirement at that time. The conditions were such that the ball was moving for me. I just tried to do it and got good results."

Afridi revealed that there was a plan in place to get Kohli out in his last over of the match. "Yes, there was a plan for it. Virat Kohli is a number one player. I think there's no difference between him and Babar. Both play the same way. The way I bowl to Babar in the nets, I tried to bowl the same way against Kohli. When I came in the third over, I wasn't getting the swing and seam which was there previously. My effort was to continue in the same way, just focusing on hitting the length and do some slow cutter in the end."

Pakistan's next match in the tournament will be against New Zealand on Tuesday in Sharjah.

Star-studded Team India's meek surrender is a cause for concern!

Playing for 19 years primary reason behind my Khel Ratna,...