Wins her 50th medal at the national level 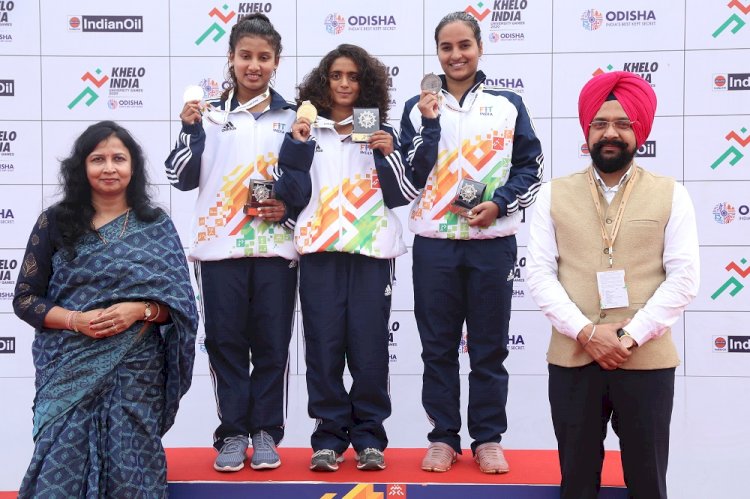 Kalyani, barely 20-years-old, is not new to creating records: at the 2019 Khelo India Youth Games in Pune, she plucked out Gujarat’s first gold medal; in this year’s edition at Guwahati too, she ended up with 5 medals, among the highest for a swimmer at the event.

She has been at it at the KIUG in Bhubaneswar as well, garnering four medals for Veer Narmad South Gujarat University, accounting for a third of her team’s haul here.

“Swimmers need regular pool time to keep improving,” Kalyani explained, “The standard of competition also makes a difference. Here in Bhubaneswar, the standard has been very high in my events. As a result, my timings have also improved.”

Kalyani’s father and coach Ajay Saxena, described the struggle to prepare for back to back competitions as very ‘tough’ but also ‘rewarding’ for an athlete. “If you are planning back to back competitions, then workload becomes a huge issue,” he says, “I have been working on her over the past few weeks, trying to strengthen some of her weaker strokes and tail off the stronger ones,” he said.

According to Kalyani herself, her strongest stroke is the butterfly and not surprisingly she won an emphatic gold in the 200m, finishing three seconds ahead of Nikitha SV. Her main focus in training, though, is on the freestyle. “Most people will claim that as their strongest stroke,” Ajay laughed, “but she has to work harder on it.”

“One of the big challenges at these Games has been leveling up in competition,” Kalyani said. “Competing here against swimmers who are older than me and have more experience has been very rewarding.”

For the Gujarat girl, KIUG will be the last round of competitions for a few months, as she looks to get back to a strict training regimen focused on weeding out mistakes that may have crept into her game.

Kalyani expressed her happiness at winning her 50th medal at the national level but she continues to be grounded.

“You can never be entirely happy. I have made some silly errors here in some events. That needs to change,” she said. “If you are not focusing on improving then you are standing still, which makes no sense as a swimmer.”