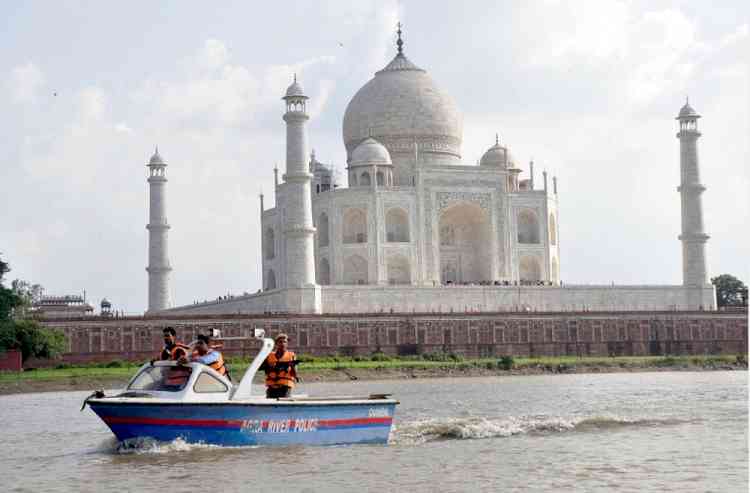 Agra: With copious rains in the hills, the dry and polluted river Yamuna has sprung back to life drawing thousands of cheering people to its banks.

Will there be a flood? How long this beautiful scene with the river flowing full to the brim will continue to inspire and fascinate us? These are the questions everyone is asking.

The rain washed Taj Mahal against a cloudy skyline dazzles, as tourists, still few due to the pandemic, express awe and wonder.

The Yamuna at the rear of the Taj Mahal has charged the environment and the lush green vegetation around the Mehtaab Bagh all the way to the Agra Fort and beyond is a delight to watch.

The controversial Taj Corridor is now a sprawling green space dextrously created as a buffer between the Taj and the Fort, both world heritage monuments. The picturesque skyline against a full flowing Yamuna is an experience that tourists shall never forget, say the guides.

From a "sickly sewage canal", the Yamuna river stands as a vibrant and attractive water body which is the lifeline of the city. Heaps of garbage that had accumulated along the banks have disappeared.

"The banks are now cleaner and greener thanks to the monsoon rains. The chirping birds are back and people stop by for a while to enjoy the spectacle of the Yamuna in its pristine glory," said Nandan Shrotriya, a temple priest of the Yamuna Kinara road.

It is worth recalling that the Mughal emperor Shah Jahan built the Taj Mahal because of the Yamuna river, but in the past few decades, due to lack of fresh water and pollution by industries, the river has lost its charm and ancient glory.

For most part of the year, the Yamuna remains dry and polluted as upstream barrages from Hathini Kund to Wazirabad, Okhla and Gokul hold back all the water. The downstream cities suffer as a result.

Environmentalist Devashish Bhattacharya says there is an urgent need to ensure a minimum flow of water round the year so that the river remains alive and sustains the precious aqua life.

Over 500 years ago, it was the grandeur of the Yamuna that had attracted the founder of the Mughal dynasty to open shops in Agra. In later years, his descendants built some of the magnificent monuments like the Taj Mahal and the Etmaduddaula along its banks.

While the younger folk have generally stayed away from the stinking river which holds no charm for them, people of the older generations do occasionally venture out to conduct ritualistic pujas and baths.

"Unfortunately, the dozen-odd ghats along the riverfront, which once was the centre of a thriving commercial activity and river culture, have disappeared without a trace, reducing the 20 km-long riverfront to a vast wasteland," Bhattacharya added.

Ahead of polls, BJP appoints Assembly in-charges in Uttarakhand

NTPC charts way forward to contain the spread of Covid-19...